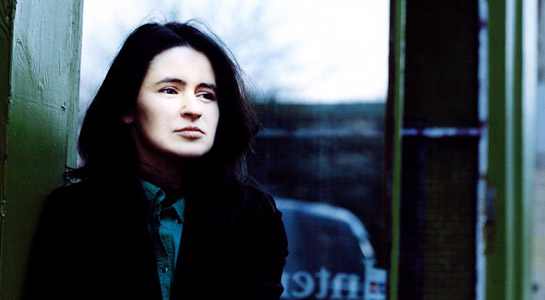 To those who loved them, Glasgow, Scotland’s Delgados were the near-perfect blend of churning, indie-rock edginess and stirring, girl/boy vocals, wrapped in gasp-inducing orchestral arrangements that made time stand still. A tough act for vocalist/guitarist Emma Pollock to follow, you might think, when the band split amicably in 2006. And yet, Pollock’s ’07 solo debut, Watch The Fireworks, wasted no time in identifying how crucial she had been to the unique sound of the Delgados. Three years later, the former physics major returns with The Law Of Large Numbers (Chemikal Underground), which goes down like a couple of dry martinis after a savory meal, welcoming you to Pollock’s expanding universe of sound. She graciously spoke to MAGNET twice when the recording hardware malfunctioned on the first attempt. Pollock will be guest editing magnetmagazine.com all week.

MAGNET: Why has it been three years between solo albums?
Pollock: To be honest, the way it’s gone. The first one was done in 2007. Then the next year I did a bit of touring, so I didn’t really start writing for the new record until halfway through 2008. So, by the time 2009 rolled round, I was actually starting to record. Even though, yeah, it does feel like a long time since the last record, to me, you shouldn’t put out a record until it’s ready.

That’s funny, because I remember when the Beatles used to put out a new album every six months.
I do know people who feel if you haven’t done something every 18 months then you’re not working hard enough. But I was trying to do something that was a little bit of a progression, if you like, from the last record. Because the last record was definitely made with the Delgados. But this one, I like to think, is me, working out what to do on my own. I think the last one is a lot sweeter, more songs-based, whereas this one is edgier. And more abrasive, which I really like. It’s more jagged than the first one, which was smoothed out quite a bit. I really love the new record for its diversity. It’s quite eclectic.

That’s the truth. You have one song with some unexpected New Orleans-style jazz accompaniment. Who’s in the live band? Do you use any of your old pals from the Delgados?
No, the new one is not connected to Delgados, at all. We have Jamie Savage, who is (Pollock’s husband) Paul’s younger brother, and he plays guitar and piano. Then a couple of guys, Jonny Scott and Graeme Smillie, who play drums and bass. And they’re fast becoming the busiest rhythm section in Glasgow because they’ve been playing with the people in Idlewild.

Have you ever considered using Dave Fridmann as a producer? I love what he did to The Great Eastern by the Delgados.
I’d love to, but I don’t think my budget can stretch to that. But who knows? Maybe the opportunity might present itself one day. It’d be a dream come true if Paul and I could both go over there and make a record.

Did the Delgados split amicably because Stewart Henderson decided to go his own way?
[Laughs] Yeah, the funny thing is Stewart has gone his own way, but he hasn’t really moved very far. He’s still managing (Delgados-run label) Chemikal Underground. I still see him virtually every day. I’m still part of Chemikal Underground and do jobs for it every now and again. It’s funny because Stewart is no longer the bass player. He’s the guy at the other end of the room, putting out my record. He plays a very different role now with me. I go to him to come up with ideas to get across whatever I do. All these different experiences we’ve had and yet we’re all still very much together. We are a really odd group of people in that respect.

In fact, you and Paul have been together since before the Delgados.
Yeah, we went to university together.

Since you brought it up, I read in Wikipedia, that well-known source for never getting things wrong, that you studied physics and archaeology in university.
Now, this is a rumor that’s fast becoming an urban legend. I did physics. Somebody wrote in Wikipedia that I also did archaeology. I keep thinking I should have it removed, but, naah.

Well, as long as you’re a physics whiz, can you tell me something about the law of large numbers, which is the title of your new album? Scott Miller of Game Theory once tried to explain string theory to me, and that was a complete waste of his time.
Oh, dearie me. Well, the law of large numbers is a real law. I’m really fascinated by numbers and science in general, which is not surprising because I’m a physics graduate. As is Paul, by the way.

[In the style of John Cleese’s Basil Fawlty fawning over two hotel guests who are both doctors] Oh, you’re both physics graduates?
This is nowhere near as complicated as string theory. Imagine you have an experiment that involves results of equal probability. With a dice, you have six possible results, as long as the dice isn’t loaded. So, the bigger the sample you take—i.e., the more times you roll the dice—the closer the results will tend towards the theoretical results of rolling the dice. If you roll that dice to infinity, each of the sides will come up a sixth of the time. In practice, if you roll that dice only 60 times, you won’t get 10 ones, 10 twos, 10 threes. You might get eight of one, 15 of another, nine of another. They won’t be distributed evenly. The bigger the sample, if you roll that dice 600 times, the results will tend more and more towards 100 of each side.

That’s where the crapshooters run into trouble.
Yeah, it’s what gamblers run afoul of all the time. They think if you hang about long enough, the odds will balance themselves out and turn in your favor. But it doesn’t work like that. If you walk into a casino and watch the roulette wheel, there’s no way of knowing when those numbers are going to kick in and things will start to balance themselves out. It’s fascinating to me that people are so dissatisfied with the fact that you cannot predict. So, this obsession with fortune tellers.

We spoke briefly last time about Scottish film. I haven’t seen many, but the ones I’ve seen have been terrific. In the past few years, Hallam Foe and Red Road, in particular. Can you pick a few favorites?
Well, I did really like Red Road. When you know a country and a city and a culture as well as you do when you’ve lived there pretty much all your life, you know when someone captures that in film. The Red Road flats, I don’t know that area very well, but it’s always utterly compelling to watch your city onscreen. And there’s no romance in that film. It’s just telling it like it is. And also Ratcatcher, I really liked that one, too. That’s when the new flats were being built. It’s been a long time since I’ve seen that one. Scottish film does tend to present the bleak side of life. You don’t get many Scottish films about wealthy families living in the West End. That doesn’t seem to be what makes Glasgow tick. Ratcatcher has wonderful direction. The young boys were really great. It’s an accurate portrayal of life at that time.

It was pretty funny, too.
I heard something about humor recently, about why we all feel quite homesick when we leave our home country. Everybody assumes that there’s a certain consistency in conversation style and humor, certainly in the Western world. But in actual fact, I heard this woman from the Netherlands commenting on how vicious and raw and aggressive comedy is in Britain. That would never happen in the Netherlands, she said. I thought that was an acute observation. When people here want to make their true feelings be known, they’ll do it through comedy, through satire.

Hey, I grew up idolizing the Monty Python guys who held nothing back in that regard. What was the BBC show where they did the oversized plastic pantomime caricatures of political figures?
Oh, that would be Spitting Image. It’s all that type of thing where people are not afraid to rip a politician apart. We may be all part of the Western world, but when you get right down to the nuts and bolts, the cultures are all really quite different.

Well, you know what Dorothy Gale said, “There’s no place like home.”