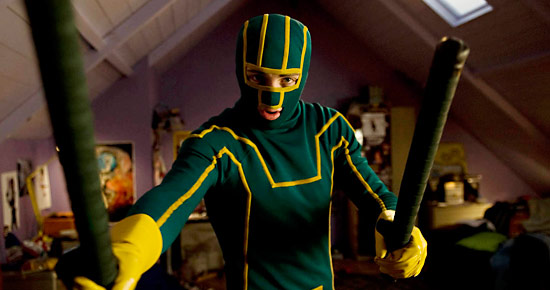 MAGNET’s first missive from Austin doesn’t involve any hot new bands or sold-out showcases. The film portion of the SXSW festival got underway Friday night with the screening of Kick-Ass. Mitch Myers reports.

The South By Southwest Film Festival got off to a sluggish start on Friday evening, despite the massive number of conference attendees and requisite, red carpet star-power. The major premier of the evening was highly publicized, quasi-mainstream action comedy Kick-Ass, which integrated the fanboy/freak-geek/sons-of-Apatow comic aesthetic with choreographed, Tarantino-styled fight scenes and bloody grindhouse violence. Action/comedy hybrids are getting pretty popular these days, and this flick touches all the right bases fairly well. British director Matthew Vaughn has learned his lessons of contemporary and postmodern filmmaking, and his dark vision turns the standard superhero storyline on its head in a good way. Actor Aaron Johnson is believable as an unexceptional high schooler who turns himself into a super-powerless-hero, and that McLovin dude gets to wear a cape again, but the strange dynamic duo of Nicolas Cage and young Chloë Mortez steals the show as a father/daughter vigilante team with an appetite for high-tech weaponry and revenge. This is potentially big worldwide business for Lionsgate, and the sequel-ready conclusion clearly leaves the fate of Kick-Ass II in all of your hands.

After getting my ass mildly kicked, I ran over to the Austin Convention Center to see American: The Bill Hicks Story, a totally cool documentary about the viciously insightful Texas-born comedian. Imaginatively assembled with iconographic imagery, animation, commentary from friends, family and industry peers as well as clips of Hicks’ comic routines at all points in his career, this is a thoughtful homage to one of the more insightful social critics of the last comedic century. If you love stand-up comedy, then you have to love Bill Hicks, and it’s still not too late if you don’t.

The film festival is particularly well-known for its outrageous midnight movie series, and for this year’s first midnighter, SXSW chose Tucker And Dale Vs. Evil, a low-budget satire of those kids-on-spring-break-go-out-in-the-wilderness-and-get-hacked-up-by-backwoods-slasher-psychopaths kind of films. Actors Tyler Labine and Alan Tudyk are rock solid as two misunderstood bubbas who just want to fix up their dilapidated “vacation cabin,” and Katrina Bowden is mighty hot as Labine’s potential love interest, college babe Allison. The rest of this young cast runs around the woods with hysterical abandon, inadvertently offing themselves one by one until D&T’s final showdown with “evil.” If all goes well, Tucker and Dale could become the Bill and Ted of redneck comedy, but probably not.

Stay tuned, and hope for more ambitious programming as the film fest continues for another nine days.