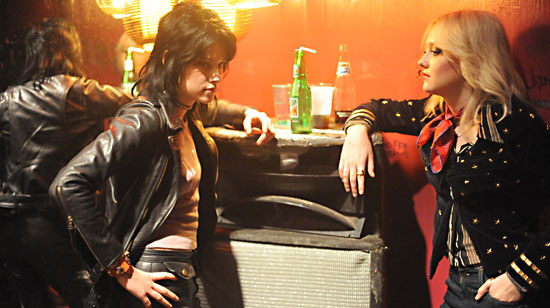 MAGNET’s Mitch Myers files his fifth round of notes from the SXSW Festival.

I have to say that the sad news of Alex Chilton’s death affected some folks down here at SXSW, and I was definitely one of them. Let me go on the record to say that when I was a kid, the very first 45 single I ever bought with my own money was “The Letter” by the Box Tops. I don’t need to explain the rest of the tale; Chilton’s career history is all over the web, and he left behind a number of important sonic documents for us all to examine. So, don’t forget cool discs like Bach’s Bottom, Like Flies On Sherbert, Feudalist Tarts, No Sex, High Priest and Black List, just to name a few of the forgotten gems.

Although I didn’t turn in an Austin report yesterday, I still immersed myself in music the night before. Most notably I attended a killing DJ set by Madlib, who concluded his mix with a tour-de-force old-soul-and-funk montage using only original vinyl 45s. (But not “The Letter.”) I also got my head blown off by Japanese psychedelic space rockers Acid Mothers Temple, which helped wash away my depressive midnight mourning.

Last night, I got depressed again, but not about Chilton. Actually, I was bummed out after seeing The Runaways, the new movie about the infamous ’70s girl-rock band. Starring Dakota Fanning as singer Cherie Currie and Kristen Stewart as guitarist Joan Jett, this movie is more convincing visually than it is in terms of acting, directing or script. I will say that I saw a female rock critic after the showing, and she thought it was all right and perhaps I couldn’t identify with the characters. But I’m telling you, it just sucked. Yes, there is plenty of mildly accurate history here, and the recreation of the nascent glam era in Southern California was serviceable, but this movie is so lame and superficial that it just felt sad to me. The bright spots were a few of the music numbers, which had more drama than the rest of the flick. The only actor who really rose to the occasion in my humble opinion was Michael Shannon as jaded, wicked and manipulative semi-impresario Kim Fowley. Still, Shannon wasn’t nearly as jaded, wicked or manipulative as the real Fowley, but we take what we can get from these situations.

So, once again I had to forge out into the night to escape my troubles, and I found sweet relief at La Zona Rosa, where the king of the Kinks, Ray Davies, put on a fine concert performance, playing an impressive number of truly wonderful songs. The set list included a few songs from his last CD, Working Man’s Café, but focused primarily on Kinks material including “20th Century Man,” “Sunny Afternoon,” “Apeman,” “Dedicated Follower Of Fashion,” “Two Sisters,” “I Need You” and “Tired Of Waiting.” Davies even called out opening band the 88 to help him rock out for the end of his show, which, of course, included “Lola” and “You Really Got Me.” After that, dazed in confused in Austin, I stuck around for Roky Erickson with Overkill River and danced to songs like “Starry Eyes,” “Two Headed Dog” and the obligatory encore, ”You’re Gonna Miss Me.”

I stumbled home at three this morning but awoke spiritually cleansed and ready to begin again. Apparently this festival stuff is hard work, but somebody had to do it.

One reply on “SXSW Report: Walk Don’t Run (Away)”

I have to disagree with Mitch on The Runaways. The films does a great job of evoking the period and Dakota Fanning is terrific as Cherie Currie. Kristen Stewart’s portrayal of Joan Jett is a little bland and Shannon’s Kim Fowley is way over the top. It’s a simple movie about drive and excess in the music biz.