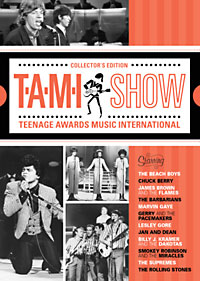 If you wanted to get straight to the heart of an exploding 1964 pop-music scene, you couldn’t do any better than The T.A.M.I. Show. (T.A.M.I. stands for Teenage Awards Music International.) The year that saw the British Invasion turn the U.S. pop charts upside-down also witnessed a thriving Motown contingent as well as the emergence of a happening L.A. phenomenon called surf music. And this nicely restored DVD, out today on Shout! Factory, captures every nuance of the era in pulse-pounding black and white.

With a lineup that included the Rolling Stones, Beach Boys, James Brown, Supremes, Leslie Gore, Chuck Berry, Smokey Robinson & The Miracles and Marvin Gaye, the show was filmed live at the Santa Monica Civic Auditorium by director Steve Binder on Oct. 29, 1964, before a mob of screaming young girls—and hosted by Tinseltown’s amiable surfer dudes, Jan Berry and Dean Torrence. Centuries from now, the entire experience should be easily fashion carbon-dated by scantily-clad go-go dancers wearing everything from early bellbottoms and boots to striped rugby shirts and bikinis that closely resembled ladies underwear, while doing the hully-gully, the frug, the swim and the monkey nonstop in the background (and foreground) of almost every shot.

Jan & Dean are shown calmly zipping through the streets of Los Angeles in the opening credits as their chart hit “(Here They Come) From All Over The World”—penned by Phil Sloan and Steve Barri—extols the international flavor of the headliners: “The king of the blues, soulful James Brown/The Beach Boys singing now ‘I Get Around.'” The Stones were so under-the-radar in ’64, the song’s lyrics mistakenly ID their home town: “Those bad-looking guys with the moppy long hair/The Rolling Stones from Liverpool have gotta be there.”

Chuck Berry kicks things off with scorching versions of “Johnny B. Goode,” “Maybellene” and “Memphis,” alternating with Brian Epstein’s other big ’64 group, Gerry & The Pacemakers, performing current smashes “How Do You Do It” and “It’s Gonna Be Alright.” With Gerry Marsden and Co. egged on by a houseful of teenage screamers, the punch-for-punch competition is not as one-sided as you might think. Pacemakers ballad “Don’t Let The Sun Catch You Crying” features brilliant Phil Spector arranger Jack Nitzsche conducting a pit band that must have featured most of Spector’s famed Wrecking Crew, including fabled session drummer Hal Blaine.

Long-lost footage of the stripe-shirted Beach Boys pounding out “Surfing U.S.A” to the tune of Berry’s “Sweet Little 16,” then breaking teenage hearts with Brian Wilson’s show-stopping ballad “Surfer Girl” (sung mostly out of one side of his mouth), is followed by their current hit, “Dance, Dance, Dance.” Dennis Wilson’s frantic drumming and flailing, dirty-blond hair was always as much a highlight of early Beach Boys shows as Carl Wilson’s rocking Berry-esque guitar leads.

In the middle of Jan & Dean singing their new one, “Sidewalk Surfing,” Torrence opens his guitar case, dumps his prototype solid-wood, ultra-short skateboard out on the floor and tools around onstage with the cat-like moves of a guy who’s done this plenty before.

Marvin Gaye absolutely shines belting out early hits “Stubborn Kind Of Fellow,” “Can I Get A Witness,” “Pride And Joy” and “Hitchhike,” while backed by vocal trio the Blossoms, led by Darlene Love, one of Spector’s studio mainstays, whether solo or fronting the Crystals.

The pride of Tenafly, N.J., Leslie Gore, with her expensive coif kept in place by at least two cans of hairspray, plays the downtrodden girlfriend to a tee with a brace of Quincy Jones-produced gems like “Maybe l Know” and “It’s My Party,” then lights a candle for women’s lib with her anthemic “You Don’t Own Me.”

Smokey Robinson looks so young here he appears to be the nephew of the three grizzled veterans who back him up as the Miracles. Neophyte though he may have been, Robinson knocks out “You’ve Really Got A Hold On Me” and “Mickey’s Monkey” with the class of a show-biz vet. Boston’s Barbarians, featuring caveman drummer Moulty, who lost one of his hands as a youngster, gives a glimpse of garage rock yet to come with a throbbing “Hey Little Bird.”

With hair piled high, the Supremes, in the days just before they’d be headlining a show like this, sound terrific, abetted by maestro Nitzsche’s orchestra, in compact outings of early hits “Where Did Our Love Go” and “Baby Love.”

Teen heart-throb Billy J. Kramer, backed by the Dakotas (yet another hitmaking British outfit from the Epstein stable), runs through a brief set of Lennon/McCartney penned gems (“From A Window,” “Bad To Me”) played so quickly you can catch the guitar player gulping at the bass player when they intentionally omit the second eight bars and head straight for the bridge of “I’ll Keep You Satisfied.”

James Brown And The Famous Flames, on the other hand, get plenty of time to let “Please, Please, Please” unspool at its own pace. Nattily attired in hound’s-tooth jacket with matching waistcoat, soul brother number one is in top form, especially on the dance floor, where he defies the laws of gravity while pirouetting with such gasp-inducing flair that he must have been the envy of Rudolf Nureyev.

A tough act to follow, and yet the babyfaced, moptopped Rolling Stones gladly accept the challenge. With 45 years of hindsight, it’s hard to believe these peach-fuzzed boys are the same weathered old codgers still out there on the road. Of course, this is before the Stones really caught fire stateside in early ’65 with “The Last Time” and “(I Can’t Get No) Satisfaction.” So, the set consisted of solid early material like “Around And Around,” “Time Is On My Side,” “It’s All Right” and “It’s All Over Now,” about to become their first U.S. top-10 smash. Rhythm guitarist Brian Jones already shows signs of bags under his eyes, but Keith Richards looks like he’s just finished his paper route. And pouty-lipped, maracas-wielding Mick Jagger is already fab-gear enough to make an SRO crowd of ecstatic teenage girls experience things they’ve never felt before.