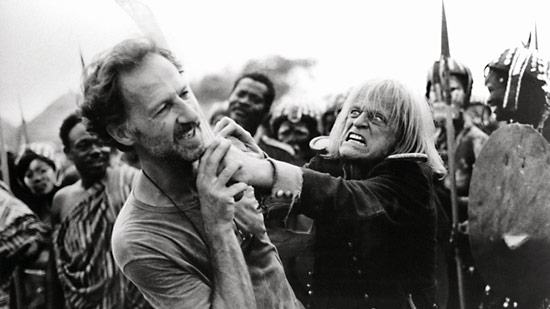 Petkovic: “I’ve never met a madman I didn’t like.” That might as well be Werner Herzog‘s epitaph. The German director has always captured them on screen. Sometimes real (in documentaries), sometimes imagined (in stories). He found both in Klaus Kinski: a real-life madman who could act even crazier. Herzog and Kinski teamed up in some of my favorite films: Aguirre, The Wrath Of God, Nosferatu The Vampyre and Fitzcarraldo. In each, Kinski is the vessel for Herzog’s vision of a megalomaniac trying to transcend it all but crashing when the world, mortality and his own mania get in the way. Offscreen, Herzog and Kinski weren’t friends. They were the best of fiends, bonding with one another despite myriad nasty eruptions: threatening to kill each other in the Amazon rain forest during the filming of Aguirre, cursing and fighting during Fitzcarraldo, assailing one another in public. In his autobiography Kinski Uncut, the actor called Herzog “a nasty, sadistic, treacherous, cowardly creep.” In his film My Best Fiend, Herzog portrayed the actor as a total lunatic. Yes, theirs was a marriage made in hell. But just look at those beautifully demonic offspring. Every one of them is inspirational.

Yeah, Klaus was NOT the kind of guy that you’d want to run into out in the woods by yourself, which I actually did once. He gave me a creepy look. He moved to Bay area I think because his daughter was here and he lived in Fairfax, in Marin and used to walk out to the State preserve. He once approached my (now ex-) wife and propositioned her with some lewd suggestions. Dirty old man.