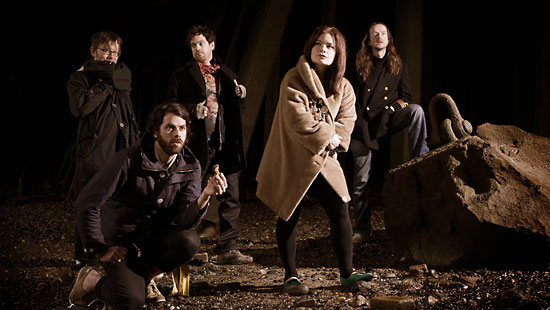 The U.K.’s Tunng always seems to be in a constant state of transition, being a band that believes in musical experimentation with a lineup that’s done a bit of changing over the years. In fact, the band’s fourth full-length, …And Then We Saw Land (which came out this month on Thrill Jockey), was made with a new lyricist, lead vocalist and sounds not heard on previous albums. It’s just another chapter in the ever-changing world of Tunng. The band will be hitting the European festival circuit this summer while it promotes the new release on tour. Check out this mix tape that multi-instrumentalist Phil Winter made for MAGNET.

Pentangle “Bells”
Mike put me on to this one. Just completely bonkers. Video

Delta 5 “Mind Your Own Business”
One of my favourite lyrics ever: post-punk petulance at its best. Also, check out the Wrangler remix of this coming soon! Video

To Rococo Rot “Lift”
Simple slightly jacking electronica of which I’m a bit of a sucker. Video

Audion “Billy Says Go”
Tugs at my heart strings. Not so popular with the rest of the band, but as ever, it takes all sorts. Video

Espers “Meadow”
Everything in its right place. Let’s all lie down in the meadow. Video

The KLF “What Time Is Love”
Part of growing up—one of the most important questions ever asked! Video

Dirty Projectors “Stillness Is The Move”
We all like this, which makes it a very rare beast! Plus, there’s a wolf in the video. Video

Medium Medium “Mice Or Monsters”
Believe it or not, this was a big favourite in the school playground. It’s the only record I own that has saxophone on it! Video

[…] of, check out Thrill Jockey artists Tunng’s mixtape for Magnet […]

[…] Interested in checking out what types of stuff Winter and the gang likes? Check out the mixtape here. […]