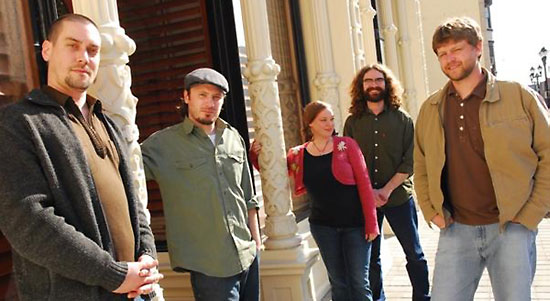 One night in 2004, Philadelphia transplant Todd Barneson was flipping around on the TV when he came across a live performance by Alison Krauss & Union Station. While watching the bluegrass legends, the singer/songwriter from Wisconsin had a revelation of sorts. He called his friend Adrien Reju (a fellow revered Philadelphia singer/songwriter) and insisted that they start a bluegrass band. She was in, and the two wondered who else would be right for the gig. They called Chris Kasper, and just like that, a promising new supergroup of Philly songwriters was formed. The only catch was that each member’s songs couldn’t have been any less bluegrass. But once the extraordinarily gifted singers and musicians set to work transforming their songs together, the result was beautiful, harmony-dripping music that even the most fervent bluegrass aficionado would assume was born in Appalachia.

It began with living-room jam sessions in bassist/producer Jeff Hiatt’s living room in early 2005, and it was eerie how immediately their “urbangrass” sound came together. Propelled by soaring and impeccable three-part vocal harmonies, superb songwriting, moving and energetic live performances and Barneson’s virtuosic mandolin playing, the musicians soon realized they had stumbled onto something very special. They put each of their careers on hold and dedicated themselves completely to the Lowlands. It wasn’t long before the band began to draw a great deal of attention both across the Philadelphia music community as well as from the national folk and bluegrass scenes. Philadelphia-area Lowlands shows became must-see events for musicians and music lovers alike, and the band soon began getting calls to open for bluegrass legends such as Ricky Skaggs, David Bromberg, Tony Trishka, Rhonda Vincent and the Lovell Sisters. In dive bars, large theaters and on festival stages across the Midwest, East and South, the group relentlessly floored audiences and converted scores of fans at every show. In 2007, the band released is first album, Bark And Twine, which further expanded its reach, as rabid new fans bought the CD and shared with their friends.

But in 2008, the Lowlands split up and Barneson moved back to Wisconsin. The good news is that their most highly regarded contemporaries won’t let them stay away from each other for too long. The band continues to get calls from bluegrass legends to share the bill on Philadelphia-area stops of their tours. They happily reunite once a year to play with such luminaries. A few weeks ago, they opened for Ricky Skaggs at the Sellersville Theatre in suburban Bucks County. Within minutes, the Lowlands held the sold-out crowd firmly in the palm of their hands, and whispers of “Who are these guys?” could be heard floating through the air.

But perhaps the impact the Lowlands had was even more evident on the previous night, when the band treated its fervent Philadelphia fanbase to an intimate show in local venue the Blinkin Lincoln. Nearly 200 people crowded into the bar, and the sense of excitement permeating the air was palpable. Reju, Kasper and Barneson’s most heartrending, beautiful compositions were interspersed with high-energy showstoppers in a moving performance that lasted nearly three hours. The audience members hooted and hollered, stamped their feet and sang along to every song. It was clear how much the Lowlands meant to their fans when—amid all the background noise of old friends reconnecting, sucking back shots together and cheering on the band—everything stopped as Kasper’s deeply touching “Old Piano” began. Without a cue, nearly everyone in the audience became silent. Some closed their eyes while others nodded their heads in rhythm and reverence. As the chorus arrived, everyone sang along quietly: “Take me back home to that old piano/I know a song that we all can sing/When the nights are warm and the stars hang low/Take me back home when you go.” It was a profoundly touching moment. The crowd felt it. The band felt it. We can only hope that Philly’s most unlikely bluegrass supergroup will be delivering such special moments to us for a very long time, even if they only do so once a year.

2 replies on “Philly Blunt: The Lowlands”

Another great article by Rocco DiCicco but it sucks that everything he writes is introduced by that bogus intro. Who is the drunk asshole who wrote the intro paragraph?