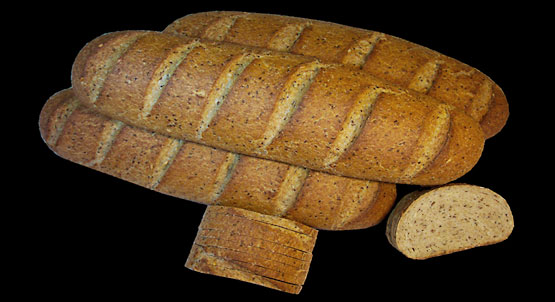 Roberts: I’ve been baking bread. A good loaf of sourdough is what I’m after, by mixing flour with water, creating natural yeast, known as a “starter” amongst bread bakers. Getting the yeast strong enough to make the dough rise is tough. My first effort was a flat, burnt-outside/raw-inside affair. Since then, some have been lumpy, some cracked and one went aflame (as I slept on through the timer). Nevertheless, doing this somehow gets me points with women, especially my wife. And if we can’t get the yeast any better with flour and water soon, I reckon we’ll have to make some ourselves—by bumpin’ uglies. Ooh La La! (Mmm Mmm Mmm Mmm.)

2 replies on “From The Desk Of Crash Test Dummies’ Brad Roberts: A Good Loaf Of Sourdough Bread”

You need to find a sourdough starter mix to make the real item. Then, you save a dab of each batch of dough in a container and us it to start the next batch. The yeast is naturally in the air of the SF Bay area only, I believe. You also have to do this thing where you put your dough ball in a warm bowl covered with a towel, maybe in barely warm oven, and let rise. But, you probably know this. Surely Dean And Delucca or Whole foods would sell the packets of starter mix, or look online. Once you get going with the sourdough, it can last many years to start the next batch of bread, or until you get sick of sourdough breads.

Since you have become more involved in the kitchen due to the handywoman of the house, i was curious if you had a meal that you enjoy cooking most? I have a lady friend coming to visit and was looking for some fresh ideas.