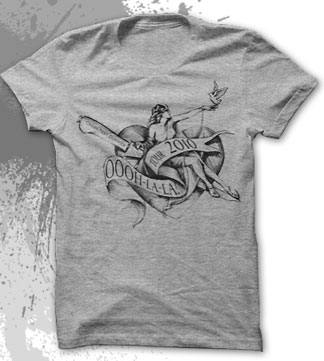 Roberts: I’m very lucky to have the most awesome wife. She hand-drew the pattern on our T-shirts. Besides having a great hand at drawing, she can also paint and—get this—she’s handy! She tromps around the house with a toolbelt on and builds shelves, rub up floorboards—the whole nine yards. I couldn’t make a birdhouse! I feed her while she does this work. It’s a total role-reversal that I am more than comfy with. It means that I can never screw up the apartment. And it’s a chance to cook! Which I love. So there you have it, folks: a handy wife. Did I mention that she has huge boobs?

2 replies on “From The Desk Of Crash Test Dummies’ Brad Roberts: My Wife”

Brad May I first say you have been a great influence in my life.
To my knowledge I have met you in an alternate reality.. Sounds weird. Don’t laugh. We’ll I don’t care, it’s true. You have a most amazing style of which has influenced me to write many magical pieces in my life. I wish, oh so wish you would trample down here to Portland Oregon as I have never witnessed the magic you behold in “person” although your music has always seemed personal to me… Your progressive movements in: two nights and maidens has always felt enchanting and “drug like” to my personal core. Anyway to keep this short (because you may never see it) if you were to show yourself once again to PDX it sure would be appreciated on many levels. Take the greatest of care of yourself and your lovely wife…Sincerely, Nathanial Ean Ryan Harner– “Time Musician”