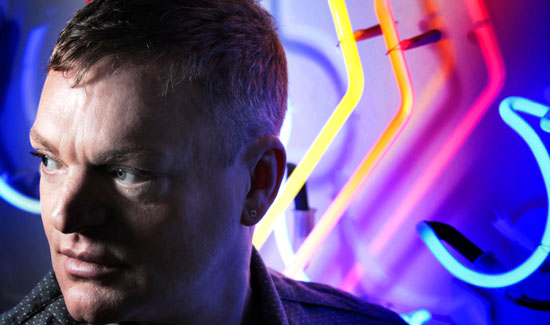 Oh, l’amour! Andy Bell is back with a brand new solo offering. The Erasure frontman is releasing the techno-tinged Non-Stop (Mute) this week. The LP was co-produced by Bell and Pascal Gabriel (Kylie Minogue, Ladyhawke, Miss Kittin, Little Boots). Gabriel also helmed Bell’s previous releases as Mimó. Non-Stop‘s first single, “Call On Me,” pulses with a glittering electronic beat and features heavily processed vocals with an Italo-disco flair. It’s quite a departure from the romantic, falsetto-driven synth pop of Erasure, drawing inspiration from soul, techno, Tin Pan Alley and even opera. MAGNET caught up with Bell to discuss the new album, computer games, palm healing and celebrity crushes. Bell will be guest editing magnetmagazine.com all week.

“Will You Be There (Seamus Haji Big Love Remix)” (download):

MAGNET: You are just releasing your second solo album. What do you feel you explore solo that you do not with Erasure?
Bell: When you have been in a band like Erasure for 20-something years, it’s a bit like being a married couple. You bring all of your experiences with you to the music. Then, when you go off to do a solo record, it’s a bit like being single for a year or so. You can pretend to be whomever you want to be! Therefore, my disco-diva/soft-punk persona comes out a bit, like being onstage.

You also released music as Mimó. Why a second solo persona?
It was really to get an unprejudiced chance of being played on increasingly ageist radio.

Newer tracks like “Running Out” have more of a European techno vibe. Have you been listening to much modern electronic music?
It’s hard to remember, but I always love a bit of of Giorgio Moroder for inspiration. I’ve been discovering some Italo disco from 1985 by a band called Kano, as well. I do like a bit of Robyn, too. At the moment, I’m listening to Kelis.

Which artists inspired you to begin singing?
I would have to say mostly the Ronettes, and then Elvis and Buddy Holly. When I was a teenager, I loved to sing along to Siouxsie And The Banshees, Japan, Yazoo and, of course, Blondie.

You have one of the most distinctive falsettos in music. How do you keep your voice in top condition?
By trying not to smoke for extended periods and making sure you do lots of warm-up exercises a couple of weeks before a show. Also, a good steam bath always helps and lots of honey for the throat.

Which of your songs is the most personal/difficult for you to sing?
I think maybe a song like “Home” on the Chorus album, only because you need to bring a certain amount of pathos to what you are singing. You have to connect to some kind of subliminal scar, but it gets slightly more healed every time you go to that place.

You were one of the first openly gay pop musicians, and you announced your HIV-positive status some years ago. Do you consider yourself an activist, or is it just a matter of being honest about yourself?
Basically, I wear my heart on my sleeve. What you see is what you get! I hate prejudice in any form whatsoever, so it was just my way of firing first. I’m quite a peaceful person and it takes a lot to get me riled, so I’d rather do things in a quiet but effective way.

You practice the Buddhist palm-healing technique of reiki. How has reiki helped you physically/mentally/musically?
I think reiki is pretty amazing, really, but it’s all to do with angelic energy and putting positive vibes out into the world. It’s amazing what things can happen; it’s like prayer. So, I can say it has helped me in my music and darker periods.

Who is your music celebrity crush?
Debbie Harry and Brandon Flowers. Mmmmm …

Erasure’s 1994 hit “Always” was used as the theme song for the flash game Robot Unicorn Attack. How did that come about? Have you played the game?
I don’t have much patience for those kind of games, but it must have come about through Sony, our publishing company.

The Tories have just formed a coalition with the Liberal Democrats as a result of the U.K. election. Are you active politically, and how do you feel about this development?
I voted for Labour and the Green Party, but you have to give everyone a fair chance. I’m open to newly reformed parties, etc., but I don’t think it’ll be too long before they revert to their wicked ways. It’s a dirty game.

When can we expect a new Erasure album? And will it be the concept album of nursery rhymes Vince Clarke has claimed you are recording?
A brand new Erasure is on the way for 2011, and the nursery-rhyme project is waiting for my warbles.

What is the biggest goal that you have not yet achieved?
I wouldn’t mind doing a bit of opera (Threepenny or otherwise). And maybe be a killer in a horror film!