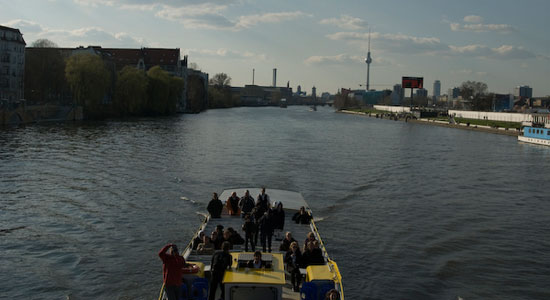 Berlin, Germany, April 2
In the culturally diverse mecca of former East Germany, we begin a 27-day tour of EU & the U.K. Supporting the entire tour is our dear friend (engineer and pianist) Nils Frahm. This, the first entry of our journal, finds us on night two of the tour in Berlin, Nils’ hometown. The venue is the newly reconstructed Magnet in the Kreuzberg neighborhood just off the Spree River. On the other side of the river stands a portion of the Berlin Wall, now a tourist spot complete with commissioned murals from artists. On the adjacent riverside lies the newly sprouting spring grass atop of which people sit in the late-afternoon sun, slowly nursing their ice creams.

We arrived a bit early and went for a walk with our friend (and lovely musician) Greg Haines, who opened for us on the first night in Hannover. Greg is from the U.K. but now resides in Berlin, so his local expertise lent itself to being a tour guide for the nearby sights and Turkish bakery we visited. On the walk, we also ran into Icelandic friends Kira Kira and her flatmate, Elín Hansdóttir (noted artist and actress of the Noi fame). Upon arrival back to the venue, we were greeted by Nils and his vintage Yamaha CP-70—all 250 pounds of it. Big hugs ensued before soundchecks. We’d played with Nils twice in 2009 in Germany and have kept in close contact.

Magnet is multi-leveled with many rooms and several different bar areas. A nice smattering of breads, cheeses and fruit garnished the backstage as we caught up with a decent Wi-Fi signal. A few of us took a short walk with Greg to a pizza shop down the street. Two large square slices of mozzarella, tomato and arugula with a hand-tossed crust aptly hit the spot before we arrived back at the venue to find the doors open and concert room packed to the gills, sitting on the floor in reverence for the quiet ensuing set of Nils. I am always taken aback by an audience acting in such a quiet and gentle regard within the midst of a black-walled traditional rock venue. We took the stage about an hour later and played some new songs from Constellations with a good finish on the note of a new song that is yet-to-be-named. We were applauded to a double-encore, which was quite humbling and a good note to begin a tour on. Murmurings of song titles thick with a German accent were rising from around the crowd and were embraced as a very flattering sound. We ended the night with a group of friends, meeting at a bar around the corner called Wendel, where we talked and laughed until almost 2 a.m. After that, we trekked a good number of blocks on foot to our hotel. A solid sleep followed with hopes of annihilating any remnants of jet lag.

In the morning, after a walk back to the van, which was still parked at the venue, we picked up Nils at his flat and his girlfriend, our former touring cellist and good friend, Heather Broderick (also of Efterklang). We had a nice brunch in the sunshine at a cafe in the Wedding neighborhood. The brunch orders were all similar ensembles of a large piece of toast topped with scrambled eggs, mushrooms, cheese, tomatoes and arugula. (Yes, I think arugula fits in any fare!) After dropping Heather off at the train station for her reuniting with Efterkland in Copenhagen to begin their EU tour, we meandered out of Berlin, heading north to the Eastern Sea and the city of Rostock for show number three. The sun was shining, Bibio was playing in the van, and people were  already napping with mouths agape. Welcome to tour.