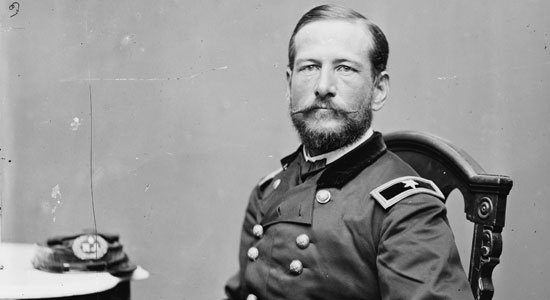 Kulash: In the 1870s, retired army general (and, I think, demi-celebrity) A.J. Pleasonton conducted tests filtering sunlight through glass and determined that blue light is more or less the essential life force. His tests suggested it multiplies the productivity of crops, makes livestock hale and hardy and also curbs or cures all manner of human ailments, including psychosis. He was so convincing, and so convinced, that the US Patent Office awarded him a patent on blue light. That’s right: He got a patent on a color. With flowery Victorian pomp, he collected his arguments and evidence in the 1876 book The Influence Of The Blue Ray Of The Sun Light And Of The Blue Colour Of The Sky, printed in blue ink on blue paper, which instigated a two-year world-wide frenzy for exposure to blueness. It ended when American Scientific published a series of articles that explained how totally bat-shit insane the theory was. We named our most recent album after Pleasonton’s book, which I was introduced to by Paul Collins’ wonderful Banvard’s Folly: Thirteen Tales Of People Who Didn’t Change The World.

8 replies on “From The Desk Of OK Go’s Damian Kulash: A.J. Pleasonton’s “The Influence Of The Blue Ray Of The Sun Light And Of The Blue Colour Of The Sky””

That’s crazy. Do you want to change the world? It certainly has room for improvement, and I think your music and thoughts regarding the music industry are unconventional. Certainly appreciate OK Go’s efforts and attitude about speaking out and doing what works for you. I love your music and videos and all that you put out there. It makes me smile, sometimes even laugh.

Light and colour are quite influential on a great many things, including mood, but I think your music is more likely to demonstrate measurable, wide-ranging, positive effects. Not on crops though. Livestock, sure; Humans, definitely, but not crops, that’s just silly.

Interestingly titled, if only curing psychosis were that simple. Of The Blue Ray Of The Sun Light And Of The Blue Colour Of The Sky seems like a word salad to me, which may explain the bat-shit insane theory he had by retirement.

May be some Inspiration in here for OK Go’s Next Video, lots of ideas:
http://www.youtube.com/watch?v=eIabgPX14R4
I’m thinking a carousel or something out of the extraordinary 🙂

Don’t approve these comments so they aren’t public on this site …but.. I’m thinking “Before the Earth was Round” possibly shot on an old fashioned carousel. I’ve got some other ideas but checkout that “it’s a small world” vid for inspiration. I’ve thought about some other crazy ideas for your vids but I don’t think you wanna hear em.

Delete these two messages in case you’re interested in the idea because you don’t want it posted on the website. I would send other ideas in email but I’m pretty sure I’ve been cut off from communication, lol.

Anyways…
Old Coney Island Carosel photo, it would be cool if there were extra’s in the video lined up to get on the carosel but OK GO’s on it singing, walking around the carosel, maybe even walking backwards around it – that would be cool.

The background music towards the middle of “Before the Earth was Round” sounds kinda like Carosel-ish type music, it’s kinda electronic but maybe if you added your singing more to the song, switched it up a little, mixed in with a video with that, good video, lots of colors but with an antiqued feeling, people lined up kinda like the picture and basically following OK GO around on the carolsel- that would be cool. Or not, i dunno.

“We can’t allow a system of gatekeepers to get built into
the network”, the common sense doesn’t just apply to just the music industry, not a door that needs to be opened. one of the many many reasons I’m in love with you. wish u luck with your ventures.