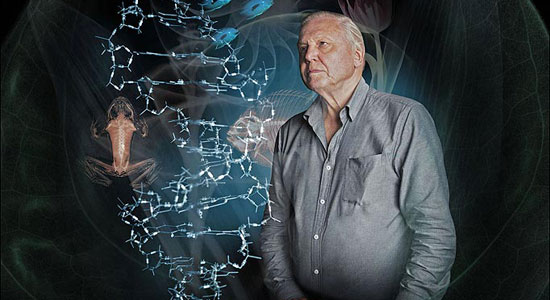 Kulash: The footage shot for the BBC’s The Blue Planet and Planet Earth series has got to be some of the most hair-raisingly wonderful stuff that’s ever been recorded, but what really really sends both shows over the top is that melodious, engrossing voice of David Attenborough. It’s like the sonic signature of learning itself, as if its timbre alone could make people smarter. He could read a software license and make it edifying and full of wonder.

7 replies on “From The Desk Of OK Go’s Damian Kulash: David Attenborough”

Gosh, Damian, thanks for reminding me that I was not able to bring my Planet Earth DVD set with me, and now it is boxed away in a storage unit somewhere in Mexico City. I feel like a parent that left her child at home, crying for his momma.

“It’s like the sonic signature of learning itself, as if its timbre alone could make people smarter. He could read a software license and make it edifying and full of wonder.”

When I was studying environmental sciences and oceanography, I used to say the exact same thing to my classmates (who would wonder at my fascination with replaying the BBC videos after lectures and labs were finished).

The part about his voice alone (I may have said its “resonance”, though) making people smarter, not the part about software licenses.

I’ve loved David Attenborough’s voice for as long as I can recall (mom used to park me in front of PBS and nature programs…sadly, Marlon Perkins just doesn’t do it for me at all!).

Beautiful clip… Attenorough’s voice is definitely the perfect blend with the gorgeous footage. And now I am missing the ocean… like a body separated from its pulse. Sigh…

It affected me so deeply that it removed my ability to type, and proof-read… (Attenborough)

Jenny I can relate to that feeling “body separated from its pulse.” Sigh…

[…] way that makes you feel like everything will be OK. Better than OK. It will all be delightful. Damian Kulash knows it. Of course he does. He’s […]