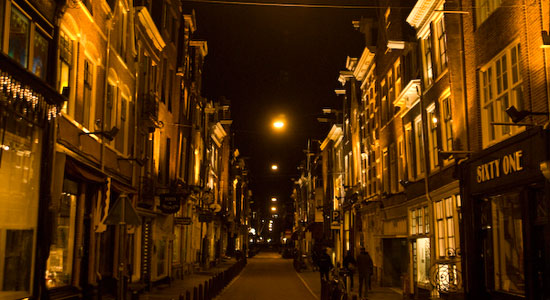 Amsterdam, The Netherlands, April 6
It was the day after Easter Sunday, and in The Netherlands, the Monday following Easter is a holiday as well. We left early to arrive for what would be a holiday matinee show. Having stayed in a charming B&B last night, we had a short drive to Department Of Eagles‘ first record as a soundtrack en route to the renowned Paradiso venue in the heart of the red-light and marijuana capitol of Europe. We did a radio in-studio performance last year but hadn’t had a proper show in Amsterdam yet. Paradiso is an enormous ex-church sitting on the banks of one of the main canals of the city. “Soli Deo Gloria” spans the arch above the stage in the big room. On the opposite side of the building is a very nice and intimate smaller room where we were to play with a nice 100-plus seated capacity atop old, creaky wooden floorbeams. We helped the stage hands cart the piano into place, and after nearly getting lost in the labyrinth of backstage dressing rooms and corridors, we found fruit and sandwiches waiting for us after our soundcheck.

I snuck quietly back into the concert room to watch Nils’ set and found no seat empty, with the collective mass of concert-goers sitting in silence. I took a seat by the merch table, removed my glasses and closed my eyes, transported by Nils’ best set yet. Rob Lowe (pianist of Balmorhea) joined Nils for a four-handed duet, which was a very nice treat. Paradiso had the best sound for any venue on this tour. For Balmorhea’s set, the crowd sweetly applauded us to an encore, and we got to spend a good amount of time post-show speaking with our new Dutch friends, including Machinefabriek (who contributed a remix to our All Is Wild, All Is Silent Remix double LP in 2009). One group of people said they travelled more than two hours to see our set, which is always humbling to hear.

After load-out, we made our way to the hotel, which could’ve possibly had the steepest staircase known to man. It also had a good-sized cat, whom we were told was named Boy; he took stock of us by aptly smelling all our bags. After dropping our bags in our respective rooms, we walked to the city center and all kind of went our own way for dinner. Andrew Hernandez (our studio and traveling live sound engineer) and I coupled up and ended getting some American fare at a pretty touristy spot. An hour or two later, we met up with the rest of the group and walked back to the hotel via the meandering canals and narrow cobblestone streets.

I am writing this sitting up in bed listening to the new release by Mark McGuire. Tomorrow morning, we will do a VPRO radio session and drive west to Gent, Belgium. Aside from Switzerland, The Netherlands has once again proven to be a top choice for stops on tour. Everything just seems to have such a clean and organized aesthetic in its design and architecture. Aside from having monumentally more bikes per capita than cars, the Dutch speak better English than most non-English-speaking countries.

We are now almost a week into tour and thrilled for two Belgian shows before a week-long U.K. stint. Travis Chapman (bassist for Balmorhea) is a self-proclaimed beer aficionado and is especially eager for the Belgian libation offerings. Our last show in Gent (which was the final performance of our last EU tour this past October) was a sold-out show packed with lovely people, and we have high hopes of a similar experience this time round as well.