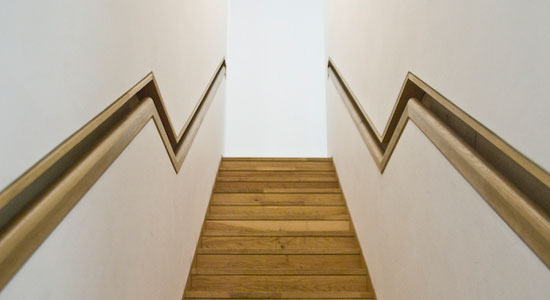 Edinburgh, Scotland, April 10
Proceeding a couple of long days of overcrowded, narrow London streets and too many round-a-bouts to keep track of, we sauntered up the isle of Britain to the picturesque beacon that is the Scottish capitol of Edinburgh. We were to play as the performance to an exhibition closing called The Thrill Of It All by English artist Peter Liversidge at the illustrious Ingleby Gallery. Liversidge himself invited us to perform in the immaculate space he had crafted surrounded by his lovely “Proposals,” each of which is basically a glorified to-do list that is typed and framed meticulously.

On this oddly sunny day, we lumbered down the ancient cobbled street under Calton Hill and an age-old castle to pull into the “car park” (as the Brits call parking lots) of the starkly and cleanly designed Ingleby Gallery. The music was to be on the second floor, and the stage area was speckled with trees arrayed between the sets of clean, white gallery walls. Alan Sparhawk (of Low) and his Retribution Gospel Choir also recently played here as part of the exhibition.

Peter, the artist and our host, arrived in a dapper suit with his wife, two young boys and his parents to greet us. Such a lovely picture of an artistic and musical family in contrast to the run-of-the-mill concert promoter. The exhibit closing was exquisite and turned out to be highly attended. The crowd respectfully sat in silence during our set in this beautiful space.

Afterward, a group of 25 of us, with all the gallery staff and adjoining friends, strolled over to what we were told was the best Indian food in town. Many naans and masalas later, we took a long walk through a park and arrived at Peter’s cousin’s flat, where we settled for the night. After a much-needed repose, we were greeted and escorted by the Liversidge family to his aunt’s home for a brunch of fresh salmon from the North Sea, toasts, coffee and juices. After several rounds of each, we had a lively mid-day stroll up to the highest point in Edinburgh: Calton Hill. Cascading with private gardens and residences, the hill is strewn with old ruins and features a complete panoramic view of the city and the Eastern coast line.

Peter and his wife showed us so much kindness. They are both artists, she being a painter by trade. Collectively, they have had showings or exhibits in Barcelona, NYC, London and even Hong Kong, amongst others. After parting ways, we loaded up for a short drive to Glasgow for our second-to-last show in the U.K. before heading south to Paris.