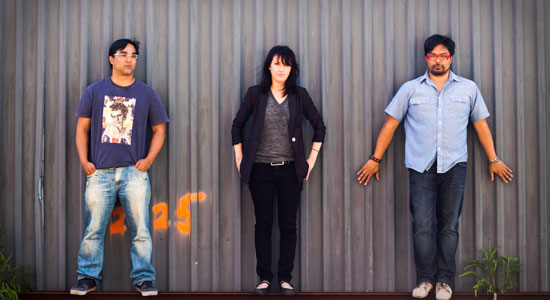 In the ’90s, most indie rockers were white males who cultivated a cool, detached image. New York-based Versus stood out from its contemporaries for many reasons. Its lineup included two (and sometimes three) Filipino-American brothers, it had a female bassist/singer, and the band gleefully professed its love for sports, meat and classic rock. After several albums and lineup changes continuing through 2001, the group went on a recording hiatus, only occasionally performing live. However, a reinvigorated Versus returned two years ago, and the band has just released On The Ones And Threes (Merge), its first full-length in a decade. Now consisting of singer/guitarist Richard Baluyut, drummer Edward Baluyut, bassist/singer Fontaine Toups, plus live violinist/keyboardist Margaret White, Versus picks up where it left off sonically: hypnotic melodies, male/female vocals and the occasional heavy guitar squall. MAGNET recently caught up with Richard Baluyut and Toups. Versus will be guest editing magnetmagazine.com all week.

MAGNET: On The Ones And Threes is your first new album in 10 years. Do you think your sound is significantly different than it was in the 1990s? Has your songwriting and recording process changed?
Richard: We still make our songs the way we always have, writing the music together in the practice space, then coming up with lyrics at the last possible instant, usually while recording the vocals. Recording is basically the same. But I do think the sound is different, just because there’s a different atmosphere now. We used to navigate in a happy sea of like-minded bands and friends. Now the air we breathe is rarefied, and we are alone.

Richard, do you feel your Filipino-American heritage has influenced your music?
Richard: I have played a Filipino folk song solo, but other than that I’d say not. However, I’ve been told we are a very musical people. Usually any band on a cruise ship will be comprised of Filipinos. And growing up, many of my parents friends had karaoke machines; before I realized that was a Japanese word, I thought it was a Filipino invention.

Edward left the group in 1996, but he has returned for the current lineup of the band. Why the departure, and what did he do in the ensuing decade-plus?
Richard: He had a four-year old son, and one year we did 120 shows, including two jaunts to Europe, so it got to be too much for him. But I also think he missed playing guitar and wanted to work on his own project, the Pacific Ocean, which put out two records on Enchante Records and one on Teenbeat.

There has been some membership turnover among the Baluyut brothers. Is James still involved with Versus? Does the strain of performing together affect your familial relationship at all?
Richard: I look at the brothers as interchangeable at this point. James wasn’t as involved on this one, but he may be more so on the next, if there is a next. Ed was gone, came back and probably will leave again. As long as Fontaine and I are both still here, Versus can continue. Being in a band with brothers can be difficult, but because we can play together somewhat innately, it’s worth it.

You’ve released records with Teenbeat, Caroline and Merge. What is your relationship with your record labels(s) like?
Fontaine: It is very amicable, at least with Teenbeat and Merge. We didn’t have much of a relationship with Caroline I suppose, other than with Glenn Boothe, and we still communicate with him. Mark (from Teenbeat) is great, and Laura and Mac (from Merge) as well. These people are incredibly genuine, and I am honored that they would even consider releasing any of our records.

You are touring with Polvo and Superchunk. Have you noticed a resurgence in interest for ‘90s indie-rock groups like Versus?
Richard: Not really. A band like Arcade Fire will get a surge of interest because they’re on TV, covers of magazines, etc. Bands like Polvo, Superchunk and Versus get interest purely for writing good music. In fact, as a backlash to the unfortunate trend of bands reuniting, I would say there is a surge of disinterest.

What’s it like touring again after such a long time? Do you have any funny stories from the road?
Richard: Does two days count as a tour? It’s actually great; I missed the minutiae of touring (like driving around in a van) as much as playing to audiences. My favorite pastime is staring at a map. You won’t hear complaining about touring from me. I don’t know if this counts as “funny,” but on our first trip to support the new record, Ed found out his new kid was about to arrive prematurely. We put him on a bus back to N.Y.—he made it in time—and we kept on to Toronto, resigned to playing as a drummerless trio. Luckily the drummer of one of the other bands is a fan, volunteered to play with us and did a great job. Quite an ominous omen for On The Ones And Threes!

On new songs like “Into Blue,” you touch on sad issues like death. Has the band been affected by anyone passing away? Lyrically speaking, why do you cover such dark material?
Fontaine: “Into Blue” is retrospective of my life in NYC. It may seem dark, but in fact is hopeful of a better way of life for me, and for the world. It’s also about the need to change and move forward. I don’t really know why my lyrics are so dark. I’ve always gone to the darkest places to see what’s there, and that’s when I usually turn around running full speed back to the light. It helps put things in perspective, I suppose. But here is also a sense of humor lurking if you listen long enough.

Fontaine, your early image could be considered dark or goth. Would you agree with that assessment? Have you lightened with time?
Fontaine: Sadly, yes, I’ve lightened up. I just couldn’t master the goth look. It was too difficult, so I decided dark was good enough! Although, I am really having a hard time letting it go. Who wants to wear white when you can wear black?

You recorded your first full-length album, The Stars Are Insane, in just one weekend. What was that process like? Would you attempt to make another album like that?
Richard: No, we couldn’t do that again. Now we’re lucky if I can play a guitar part correctly in a weekend.

After the band went on hiatus, each member worked in some type of other project. How were those different musically, and did your experiences with them inform the new Versus sound?
Richard: I think all of the splinters and incarnations are different and interesting in their own rights. And they all relate back to Versus to varying degrees. Fontaine was a little bit country, I was a little bit rock ‘n’ roll. I don’t know what Ed was. Having a new band made it more difficult to get shows and to get people interested in general, and that took a toll. Fontaine and Ed weren’t even playing music when I came a-calling. But it was pretty natural to write songs together after that time off. I think we sound better together than apart.

When you started the band, did you think that you would still be touring and recording as Versus 20 years later?
Richard: No, but I also thought the World Trade Center would still be standing. And that Times Square would never be Disneyland. And that the Cedar Tavern, Florent, Downtown Beirut, La Chinita Linda, Joe Jr., CBGB, etc., would still be open. My point being, I stopped trying to look into crystal balls a long time ago. I’m happy to be here and right now.

3 replies on “Q&A With Versus”

I have been a longtime fan of Versus and was lucky enough to catch them on tour in the late 90s a few times. Needless to say, I am extremely happy to hear their new album and hope somehow they make it out to S.F. on a tour soon. Hopefully Polvo and Superchunk can make it too. 🙂

Versus is far and away one of my top favorite bands, ever. They started when I was in college in NJ, and I would go most anywhere (NYC, Philly, even down to Richmond for a festival) to see them. Last time I saw them was my new home of Seattle, shortly before they went on break…I am thrilled beyond words to see them back together, and hope they make it out this way. I consider them one of the most unsung bands in not just indie rock, but rock, period. Great songwriting, amazing harmonies, and use of the bass as a melodic instrument. Brilliance personified.

I’m w/ permalink; these guys are incredible. This guy told me about them in college; then I went out and bought Stars are insane; then saw them live. Their live show blew my completely away; they were the best indie rock band live in the 90’s in my opinion; I saw just about every major act that includes Pavement, Lemonheads, Pixies, Replacements, Feelies, Polvo; Bob Mould, Poster Children, Mogwai, Stereolab; I mean I could go on but you get the point. There’s just some chemistry between Fontaine, Richard, and Ed that is completely a solid unit and amazing. It’s funny they mention sports; Richard was poking fun at the crowd the night the Yankees beat the Braves in I think 99. I really hope these guys continue to make music. While it would be nice if they had some large following; it’s ok with me. These guys just aren’t writing songs that are enigmatic enough; they don’t have the poster-boy lead singer; they are just a solid blue collar indie band; that happens to be the tightest band I’ve ever seen live.