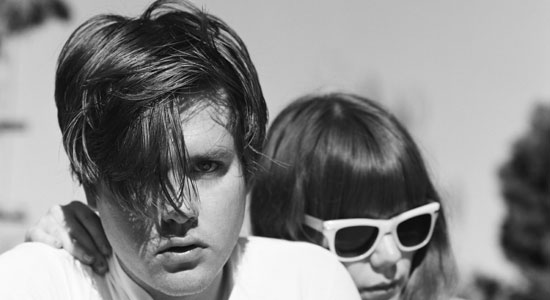 With I’m Having Fun Now (Warner Bros.), Jenny And Johnny are following in the grand tradition of girl/boy singing duos, a select conga line that stretches as far back as Sonny & Cher and X’s Exene Cervenka & John Doe to more recent warbling tandems like Mates Of State and She & Him. Jenny Lewis and Johnathan Rice are living proof the trend is still on the boil. Lewis cut her teeth in L.A.-based combo Rilo Kiley and has recently released two exciting solo efforts. Rice, a Scotsman transplanted to America as a teenager, has also issued a pair of solo albums and produced Lewis’ sophomore release, Acid Tongue, before teaming up with her for what could turn out to be the gold standard of indie-rock duos. Jenny And Johnny will be guest editing magnetmagazine.com all week.

MAGNET: Over the years, I’ve interviewed John and Exene of X, Mates Of State and M. Ward of She & Him, even did some liner notes for Sonny & Cher reissue CDs. There’s something eternally riveting about a boy and a girl singing together. Can you explain how you feel about it?
Rice: From my experience with Jenny, obviously we’ve both been doing our own thing for a while. But there’s just something about singing with Jenny that at this particular point in my career I find more interesting than singing by myself. It sounds like when we put our voices together, we’ve been singing together for many years. I like exploring it. It feels like a new character, almost.

Leap-frogging through your career in no particular order, you played Roy Orbison in the Joaquin Phoenix/Reese Witherspoon picture, Walk The Line.
I had a few lines, I did. The thing I liked best was we recorded for the soundtrack. It was a really interesting time in my life and such a fun thing to do. We went down to Memphis and filmed. And I’d never done anything like it before or anything like it since, really. I think the thing that attracted me to the movie the most was that it’s about music and that they were trying to re-introduce that kind of music to a younger generation. It was really cool. The thing that was most rewarding was getting to record the soundtrack with T Bone Burnett. We all worked together in Capitol Studios.

Did they shoot any of the film in the real Sun Studio?
Maybe they cut footage there. We did photographs in there. Everyone else was posing for pictures, and I was talking to the engineers, asking questions. They have an X marked on the floor.

Right, where Elvis and everyone else stood when they recorded.
Yeah, that was pretty cool. I look back on that time fondly.

Peter Buck really likes your stuff, I’ve heard. You opened for R.E.M. at a free show in Hyde Park in London with your band Death Valley.
That was a very emotional concert for everybody involved. The day we were supposed to have it, was when the London 7/7 bombings occurred.

Wow, the ones on the tube near King’s Cross station and on the London Transit bus near Tavistock Square, right in front of the statue of Gandhi?
Yeah, along with several others. The day after the bombings was supposed to be the concert. We pushed it back for a week, so it was the first major social and cultural event since the bombing. It was pretty cathartic for all the people there. For me, it’s still the biggest crowd I’ve ever seen. It was supposed to be over 80,000. The last time I was part of a crowd that big was the protest against Bush’s first inauguration. I’m such a big fan of Peter. He’s personally a big influence on me, musically. R.E.M., itself, is obviously one of my favorite bands. Peter Buck and Johnny Marr kind of represent to me a continuation of what Roger McGuinn started.

How was it growing up moving back and forth from Alexandria, Va., to Glasgow, Scotland?
It was cool. Northern Virginia is one of the spookiest places on earth, man. Like, it looks like Pleasantville, most of it, kind of this Stepford-y , buttoned-down thing. Everybody works for the Pentagon or the C.I.A. It’s deeply creepy. But Glasgow is such a soulful and wonderful place.

Do you consider yourself a Scot or an American, or both?
I definitely consider myself both at this point. But I don’t have a drop of American blood in me. My parents are both from Glasgow, and I feel very proud to be from there. My dad always said, “There are only five million of us.”

You and Jenny got snowed-in while you made the record. Did that have any effect on the results?
I think, more than anything, it had an effect on our level of concentration. Everything froze shut, and we had nothing to do but work. We were really able to focus in on it.

How did you meet Jenny?
I met her in a stairwell in New York. My friend Conor (Oberst) said, “You want to come over and have some drinks? I’ve got some friends in town.” So, I went over, and Jenny was sitting in a stairwell. Shook hands and became friends. Didn’t see her for maybe a year after that. Next time I saw her I was finishing up my first album in Nebraska, and Rilo Kiley was loading in to the studio the last day I was there. But we didn’t start collaborating musically until a couple of years after that. I played some guitar on her first album, Rabbit Fur Coat. I played with the band that toured for that record.

You recently boycotted a show in Arizona because of their racist immigration policies. Good for you, man.
That is true. We aren’t so high and mighty to think that just because Jenny And Johnny are boycotting Arizona it’s gonna change the world. It was a small thing that we could do, and we did it. We think that the law is vile. So many of our friends are Hispanic, Latino, Chicano. We feel that when their dignity is compromised, our dignity is, too.

Some couple write love notes. Do you ever write songs for each other?
We certainly have. But you have to do a little digging to find a love song.

Here’s a good one to wrap it up with, so to speak. You recently did an “Emerald Triangle” tour of California, right through the heart of the marijuana-farming district, with a band of friends.
Yeah, that’s right. The “Emerald Triangle” is three counties: Mendocino, Humboldt and Trinity. They also call it the “Redwood Curtain,” a bunch of different names. The idea was to do it with four musicians who had some time off: Andy Cabic of Vetiver, one of the greatest living singers in America, I think, Farmer Dave Scher of Beachwood Sparks, Jonathan Wilson and myself. We’re all friends, and we always feel like we’re heading toward the big city for a show and don’t get to enjoy the tiny little places along the way. One of the policies of the band is we only play in California. And it was harvest season, so maybe we’d play for people who are out there working.