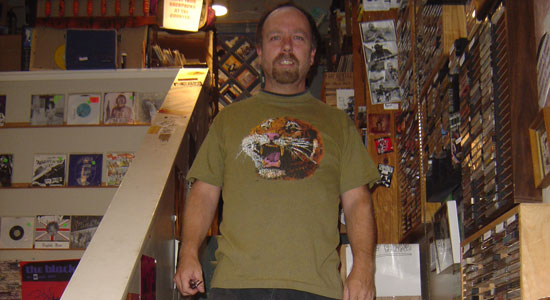 Buddy Miles Expressway To Your Skull: $4
Miles, who went on to fame as a member of Jimi Hendrix’s Band Of Gypsys, had his solo debut in 1968 with this awesomely titled psychedelic/soul album, complete with liner notes by Hendrix). Leading off with scorching guitar courtesy of Jim McCarty on “Train” atop dirty, Southern-soul horns, the album sets its tone and captures a moment in the ’60s when races and genres (like rock, funk and soul) merged, at least in pop music. “Let Your Lovelight Shine” is a straight-up sex jam, and “Funky Mule” is a hard and heavy dance party. The slow soul blues of “You’re The One” and the groovy version of Otis Redding’s “Wrap It Up” that ends with a sweet guitar freakout make this worthy of anyone’s collection.

Gil Evans Orchestra Out Of The Cool: $4
Evans was the George Martin of jazz, his arrangements having elevated Miles Davis’ work to the realm of the sublime on Sketches Of Spain, Quiet Nights and Porgy And Bess, among others. On Out Of The Cool, expanding upon the template and several of the players from Davis’ Birth Of The Cool, Evans moved into a decidedly more modal realm. He maintained a relatively large ensemble (14 players) to combine both extended modal improvisations and intricate arrangements. Charles Mingus’ The Black Saint And The Sinner Lady or Ah Um are close comparisons, though Evans retains the laid-back aspects of the Cool sound, maintaining a steady, slow burn. Fans of the Cinematic Orchestra should take note of the genesis of that band’s entire oeuvre. It is all here on opening track “La Nevada,” with its slinky, stealthy groove established by Evans on piano, Ron Carter on bass and Ray Crawford’s guitar work. The horns enter with a slightly dissonant motif reminiscent of Evan’s work on Porgy And Bess. Mingus veteran/trombonist Jimmy Knepper opens second track “Where Flamingos Fly” with smoky solo lines over a beautiful and dreamlike Gershwin-style blues. Side two highlights Carter’s astounding fretwork. This is my new favorite record.

Billy Preston The Kids And Me: $3
Preston (a.k.a. the sixth Beatle) was a master of keyboard-based funk and soul, and this is probably his best, but I have trouble sitting through an entire album of his feel-good ’70s gospel soul. “Somethin’ For Nothin’” was the single, and it still gets a little airplay to this day.

Merryweather Word Of Mouth: $2
An out-of-print rarity featuring Dave Mason, Steve Miller, Howard Roberts, Charlie Musselwhite, Neil Merryweather and others. This supergroup’s collection of “jams” lands somewhere between a ’60s jazz/dance classics album and a Bay Area Pebbles comp. Much of this is dueling guitar leads between Mason, Miller or Howard Roberts, who steals the show with his fuzz-out solos on “Mrs. Roberts’ Son,” a track further distinguished by Mason’s jazzier riffage and the hard-groove organ by Ed Roth. The vocals show up about half the time and are standard ’70s rock/blues fare—or worse when Miller sings—but occasional gems like “Teach You How To Fly” and “Hooker Blues” are true diamonds. I had heard one of these tracks on a specialty radio show recently and looked it up online. Amazon had links to back-ordered CDs for $26, but Marty had the gatefold double-album vinyl for two bucks.

Buddy Miles Them Changes: $2
Another gorgeous album of funk and soul from this drummer extraordinaire. The title track was Miles’ signature song and was featured beyond this in sessions with Hendrix and Santana. The Isaac Hayes-style rendition of Neil Young’s “Down By the River” is another standout. Miles’ cover of Rufus Thomas’ “Memphis Train” was produced by Steve Cropper, and he even covers the Duane Allman song “Dreams.” The entire album is varied but maintains an overall vibe of laid-back soul.

David Essex Rock On: $2
Like most people, I’ve always thought the title track was a great single, so it seemed to make sense that there might be a few other songs worth listening to on the full-length. Not so. This weird combination of Randy Newman meets Grease makes it all too clear as to why Essex was a one-hit wonder. I guess I could be more specific, but then I’d have to listen to it again.

Led Zeppelin Led Zeppelin: $3
These guys had a minor role in the history of rock music. Perhaps your parents have heard of them. “Good Times, Bad Times” introduced a new era of gods among us. It still sounds perfect on every level, each player’s mastery exhibited immediately. “Babe I’m Gonna Leave You” switches gears and inaugurates the power ballad, combining Page’s acoustic with the potency of the band. None too shabby. The plodding white-boy blues of “You Shook Me” and “I Can’t Quite You” are relatively weak. But “Dazed And Confused” highlights Page’s versatility of sound and ushers in dark psych rock a year before Sabbath’s debut. “Black Mountain Side,” it should be noted, is a blatant rip off of Bert Jansch’s “Black Waterside, but is still cool in that it provides such stark contrast to the adrenalized rock of “Communication Breakdown” with its furious pace and attitude. Anyway, no secret here.

John Lennon Mind Games: $1
I first heard the title track as played by the Flaming Lips about 20 years ago and have loved it ever since. I think that this is easily the most Flaming Lips of post-Beatle Lennon songs. Discuss. The rest of the album, well, it kind of sucks. “Aisumasen” is pretty cool in that it’s a slow soul tune that highlights Lennon’s affinity and affection for the style, but the rest is maudlin, trite and practically unbelievable coming from he who was the roughest-edged Beatle. Domesticity did not serve Lennon’s artistry well. $1

Paul McCartney McCartney II: a bottle of ginger ale
Macca’s enigmatic post-Wings album isn’t nearly as cool as his first post-Beatle album, which makes sense I supposed. But that’s not really a fair assessment. “Coming Up” is a great McCartney pop single that’s still a rock song. The rest is a very dated and strange exploration of bad electro pop from 1980. I’ll applaud Sir Paul for doing something totally different, kind of like Stevie Wonder’s Secret Life Of Plants album, but despite its recent rise in cred and reference, this is not really happenin’, man.

Marty is awesome, check out his zine!

thats my popa 🙂 go see him and check out his collection of music. there’s a little something for everyone. and ladies he’s single so don’t be shy 🙂

If it happened in music, Marty can tell you about it.
So keep your ears open.