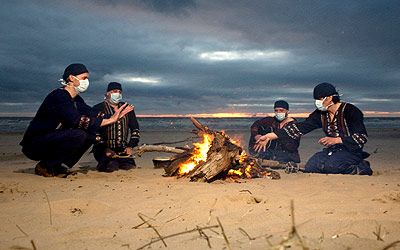 It’s hard to believe a decade has passed since Clinic‘s Internal Wranglers baffled us in the best way possible at the turn of the century. Since then, the Liverpool boys have released four distinctive psych/pop albums, toured with the world with Radiohead, the Flaming Lips and Arcade Fire, been nominated for a Grammy and kept Britain’s surgical-mask industry booming. On October 4, they’ll release Bubblegum (Domino), which was produced by John Congleton (Walkmen, Shearwater) and promises to be a more laid-back affair than their previous, more frenetic records. First single “I’m Aware” delivers on that promise, featuring shimmering acoustic guitars, sunny, languid vocals and a bright string arrangement. The track is definitively Clinic, but the change is certainly welcome and noticeable, leaving us salivating for more Bubblegum. Check out the video for “I’m Aware.”