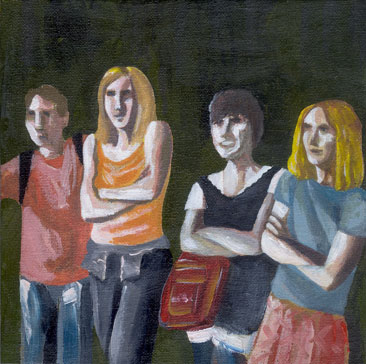 Jean: When you’re interested in a band, is it the idea of working with somebody who has a similar method or vision and not necessarily a particular sound?
Calvin: Right, for instance, Mecca Normal. The first time I saw them was on the Black Wedge tour where they got together with their friends and said, “Hey, this is important, let’s do it.” It wasn’t as if they were saying, “How can we sell this new album?” It was a tour of people, and half of them weren’t even bands.

You know, when I think of K, it doesn’t exist in the realm of “isms.” I don’t think of an interest in overly politicized dogma. I see you doing things that follow some of those sentiments, like putting out a lot of music by women and being a do-it-yourself label, but the word from K isn’t put together in a literal way. It’s interesting that you were attracted to the Black Wedge, because it was very literal.
One of my ideas, in the back of my mind, is that instead of saying that we’re smashing sexism, we’re trying hard not to be a macho rock ‘n’ roll label.

Does it ever bug you how much Mecca Normal talks about these things in literal terms?
No, I think it’s great. For me, the idea is, we’re trying to create an environment where those negative things don’t exist. I think for a lot of people who are making music in a political way … One criticism I might have is that they don’t allow for a dialogue. If you disagree with them they just turn off. I’ve encountered a lot of people in music who have strong political views who don’t have a strong tolerance for other people’s views.

They need to get out more.
It’s hard for things to change if people aren’t going to exchange ideas. If they’re only going to say, “If you disagree with me, then you’re the enemy.” One thing that’s really useful when discussing issues, especially issues of repression, is to see all the different points of views and try to understand why someone would look at something as oppressive and someone else doesn’t. Not to say that one person is right or wrong but to understand why they can exist.