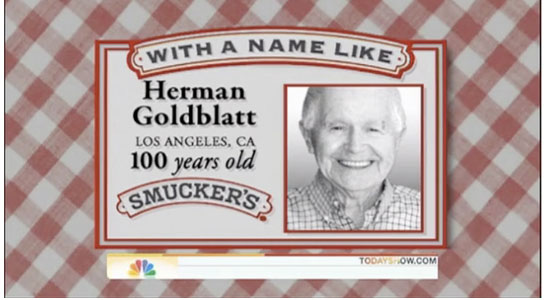 Yorn: My grandfather Herman, who we all call Pop, turned 100 years old in February. He’s a huge inspiration to so many people who meet him. Pop emigrated from Poland in the early 1920s, and now he lives very close to me in Santa Monica. He developed an exercise routine for himself years ago, when he was 80, and he still does it every day. It’s basically a series of deep knee squats he does at a railing in the parking lot of where he lives. He does 50 of them in his routine. (I’ve tried them with him, and my legs turn to rubber at 25!) Then he does a little jogging. He’s kind of a freak of nature, and he has taught me great discipline. I had to brag about Pop. I like to take him to this deli near where he lives, and he pretty much always orders a chicken soup and brisket sandwich. I guess this is how you live to 100. 🙂