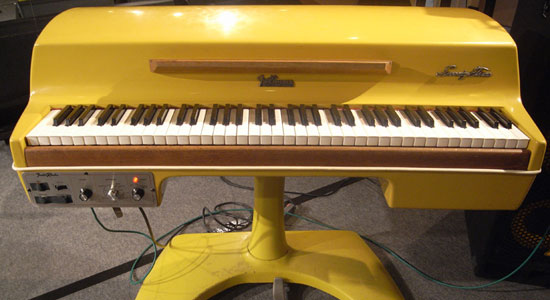 Yorn: I have this olive green Fender Rhodes Student model from the late ’60s. It was a present from an ex-girlfriend, who got it for me at the old Black Market Music on La Cienega. I miss that place. The tone of the Rhodes is so unique, so smooth. You hear it on a lot of great old jazz recordings. And it looks like something out of The Jetsons. At one point they started producing these Instructor/Student models for music classrooms. The idea was a classroom full of electric pianos, everybody playing and listening on headphones, and there would be one model for the teacher, who could turn a dial to listen to any one student separate from the others and play along with them, send backing tracks to their headphones or connect multiple players to play together. Jetsons indeed! I don’t know that all that many were made, so it’s amazing to have this in my home for working out melodies and new songs.