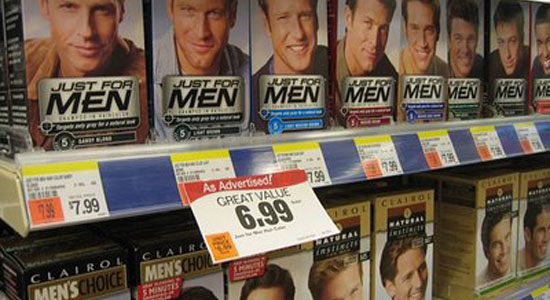 Healy: I started going grey at 25. I see alot of guys who are so worried about looking old and who dye their hair. I don’t dye my hair for two reasons: 1) I like grey hair; it looks fantastic; and 2) Hair dyes are not good enough. They look bad. I would definitely have a go on an experimental level if the products were amazing, but they’re not. I always played with my hair, cutting it, growing it long, bleaching it, dying it black once, giving my hairdresser free range. Ahhh, I even dyed my mustache black once as a joke for my wife Nora. I had a beard grown out of laziness, and when I cut it, I left the mustache, but it was very light so I bought this Just For Men stuff and had a go. The first try made it a little darker but not to the Freddie Mercury standards I was aiming for. So I did it again and this time left it on for much longer. Well I got the jet-black Freddie, and Nora laughed when she saw it. I shaved it off almost immediately but was horrified to see my upper lip had turned blue. We had a TV show the next day, too. A big one. I had a long night of washing the upper lip, but it came off in the end.