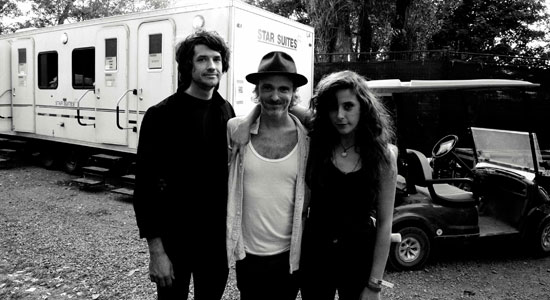 Healy: I’ve been lucky enough to have met nearly all my musical heroes. The only one I haven’t met is Joni Mitchell. It’s a thrill to be on the same side of the curtain and not feel like a stalker. I recently met Beach House at a festival in Montreal. I got very star struck. I felt all wobbly when I met them. They had soundtracked the best holiday I ever had, and they were right there. For the first time, I felt like I had two tongues in my mouth, all the words all falling out all over the place. That’s how I felt, but maybe I was less geeky than that.

2 replies on “Travis’ Fran Healy Is Happy To Hang Around: Meeting Your Heroes”

I have a similar picture with my heroes…..You and Me and Andy. It certainly is nice to meet your heroes!

I told you and Andy how I was an amateur musician in the Dallas area and you gave me the advice, “Keep at it”. I immediately wrote it down in my cell phone, so as not to forget your words. Kindness abounds. I’ve been listening to the new album on repeat all week. Great Job, friend!