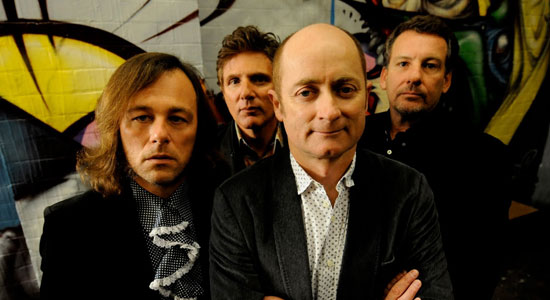 Some nights you don’t want to think of rock ‘n’ roll as great art. The Hoodoo Gurus know just what you need: to be hammered upside the head with terrific songs, one after another, until you start bouncing up and down like a brainless organ grinder’s monkey, begging for a banana. San Francisco’s Great American Music Hall is about half-full of people tonight, mostly in their 40s, who have left their social-networking devices in their pockets, so they can beg for bananas and concentrate on the thunder from Down Under about to beat them senseless.

Led by genial frontman Dave Faulkner and longtime members Brad Shepherd (guitar) and Mark Kingsmill (drums), along with bassist Richard Grossman (added in 1988), the Hoodoo Gurus stroll on stage after a short DJ set of stuff they grew up on: Velvet Underground, Flamin’ Groovies, Stones, Roxy Music. Faulkner’s trying to grow some of his hair back from the cueball-shaved look he sported for the band’s previous S.F. visit at tiny Cafe du Nord in 2007.

Faulkner formed Le Hoodoo Gurus in Perth, Western Australia, in 1981, but soon moved to Sydney and acquired Shepherd and Kingsmill. The Gurus were one of the de facto leaders of a brilliant assault force of Aussie big-guitar bands from the ’80s, most of whom achieved at least cult status in the U.S. It’s a lineup that included Screaming Tribesmen, Died Pretty, Celibate Rifles, the Sunnyboys, Eastern Dark, the Hitmen, the Scientists, New Christs, the Stems, Lime Spiders and the Hard-Ons.

“I Want You Back,” from their 1983 debut longplayer Stoneage Romeos, features chiming guitar work and high-pitched, signature “Aah aah-aah, aah aah-aah” background vocals. “What’s My Scene,” from 1987’s Blow Your Cool, gives Shepherd room to stretch out on a spiraling guitar solo reminiscent of the best work of True West’s Richard McGrath.

“Now we’ll play that tribal number that you do so well, sir,” says Faulkner, bowing in the direction of Kingsmill, whose flailing, caveman drums strike enough sparks to ignite a raging bonfire to help ward off nocturnal danger. “Leilani” is a steaming, Bataan death march through the remote jungles of New Guinea, deep into a forgotten, headhunter-infested land where crazy reports of Stone Age reptiles have made their way back to Australia. The hypnotic “Whoa-o, whoa-o, whoa-o” auxiliary vocals meshing with Kingsmill’s throbbing floor-tom work make you well aware that it might not be a good idea to stray from the main path. Like most of the Gurus’ signature favorites, “Leilani” has been extended live into a 10-minute epic guaranteed to give you your money’s worth.

Faulkner seems truly sad to announce, “We’re going to have to break our string tonight with our next selection. Every show we’ve ever played in San Francisco has always featured a member of the Flamin’ Groovies. But I don’t see him anywhere about tonight.”

M.I.A. is guitarist/songwriter Cyril Jordan who covered “Bittersweet,” originally from the Gurus’ 1985 LP Mars Needs Guitars,” on a 1986 Groovies album titled One Night Stand. The tune sounds properly bitter and sweet tonight, played in missing-man formation. “Thanks, Cyril,” Faulkner murmurs as the last notes decay about him.

As a band that’s been playing with practically the same personnel for almost 30 years, the Hoodoo Gurus have become a well-oiled, rust-resistant machine. Their set list is backloaded with winners, none more bloodcurdling than Faulkner’s gem “Like Wow- Wipeout,” which poaches the Spectorian drum intro from the Ramones’ “Rock ‘N’ Roll High School,” then runs in the other direction with it. (“I kiss the ground on which you walk/I kiss the lips through which you talk/I kissed the city of New York when I first met you.”) Once again, Faulkner screams out his utter devotion to some road conquest, while Shepherd turns a “chainsaw massacre” guitar solo into a screaming delight that channels a Jeff Beck-era Yardbirds rave-up along with the Count Five channeling the Yardbirds. It’s a blistering gem, the Hoodoo Gurus at their very best, forced to watch some girl eating cake while they have to eat the crumbs. Of course, they’ll eat those crumbs for as long as the band exists. And like it!

The HG’s played well, but were really let down by crap sound, not very clear cos it was WAY TOO LOUD!

Nothing wrong with Loud but knuckle head neandathals running the mixing desk seem to think loud over clarity is better. Bands dont need to be amplified so loud that the sound quality is fucked up in the process. As a comparison the first band were actually more enjoyable than the HG’s in that they were very clear and I could hear all instruments and they played really well.

Is more better? No.

Summary: A good band hopelessly let down by overdone sound and lighting.