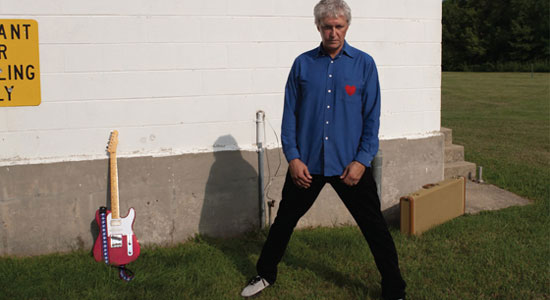 The Guided By Voices reunion tour (which is happening as we speak) is enough to get excited about, but once it’s over, you’ll have Robert Pollard’s new 18-song solo album, Space City Kicks, to look forward to. It’s out on January 15 … Pains Of Being Pure At Heart just kicked off a U.S. tour in support of its upcoming single, “Heart In Your Heartbreak,” set for a November release. The song will also appear on the band’s sophomore full-length, which is due in March … Atlas Air is the new EP from Massive Attack, and it will be released on November 22 after the band wraps up its current North American tour … The second installment of the Smashing Pumpkins’ Teargarden By Kaleidyscope project will come out November 22. Teargarden By Kaleidyscope Vol. II: “The Solstice Bare” is a limited-edition four-song EP, which will only be available as a physical release … Ari Up, lead vocalist of the Slits, has passed away at age 48 after a long battle with a serious illness … On November 26, the remastered and restored version of George Harrison’s All Things Must Pass will be released, commemorating the album’s 40th anniversary … Ben Harper, Rob Thomas, Tricky and Nikka Costa will make guest appearances on INXS’s new album, Original Sin (out January 11), which features re-imagined versions of the band’s signature hits … Bad Religion will culminate its 30th anniversary celebration with the 30 Years LP Box Set, which includes all 15 of the band’s studio albums, on November 9 …  Kaputt is the ninth LP from Destroyer, due out January 25 … Plain Recordings will reissue Royal Trux’s Thank You on November 23, 15 years after its original release.

6 replies on “In The News: Robert Pollard, The Pains Of Being Pure At Heart, Massive Attack, Smashing Pumpkins, George Harrison, INXS, Bad Religion And More”

I would like to add abit to your comment about the new INXS album coming out, called Original Sin, and the song The Stairs.

(1) THE STAIRS by INXS featuring JD FORTUNE was released this week on itunes and it is now the #1 most popular INXS song on INXS
(2) Jon Farriss and JD Fortune did some interviews this week and speak to JD being with the band and how things are going very well (www.macleans.ca/article.jsp?content=e4902084)
(3) JD and INXS have been performing in 2010 with each show being a fantastic success – check out youtube for footage from The Olympics, Broome Australia, Townsville Australia, VMWorld in SanFransisco, CA and of course, AFL finals in Melbourne just last month.
(4) While at youtube, check out JD’s fantastic solo performances from 2009 when he did performances for charity for Denim and Diamonds in Montreal and Rise Again Flood Relief in Winnipeg
(5) JD has previewed many of his fantastic solo performances as well as releasing the entire Death of A Motivational Speaker to fans via his website over the course of the last year – it is a fantastic body of work that shows his talent as a solo artist and writer.

Yes, i am a total fan and i want very much to hear ALOT more of JD Fortune – with INXS and ALOT more of his solo work!

JD FORTUNE’s version of the INXS classic “The Stairs” off the soon-to-be-released “Original Sin” CD is one of the absolute best covers my ears have ever had the pleasure of listening to!

For anyone who hasn’t heard it yet…RUN, don’t walk, to ITUNES CANADA now and purchase this glorious masterpiece by one of the most talented, inspiring and gifted musicians of our time…JD FORTUNE!

To hear some of JD FORTUNE’S amazingly brilliant original music, check out his official website at http://WWW.JDFORTUNE448.COM!

I’ve just heard JD Fortune’s cover of INXS’s “The Stairs” and it is really wonderful. He has a strong and beautiful voice, and the passion in his perfomance is just incredible. I’ve heard several songs from the new INXS CD so far, and this is easily my favorite.

You people aren’t fooling anyone. Tell INXS to get some new publicists.

I’m no publicist, but I do like knowing all of the facts!
@phyl: Thank you for those details. I appreciate knowing all of that. I did listen to JD Fortune’s contribution to this album and it is phenomenal. I can’t stop hitting the replay button. JD put everything he had into this re-imagined version of one of my longtime favorite INXS songs! Thanks!

I’ve now heard the whole album and JD Fortune’s version of The Stairs is the best song on it. It was worth buying the CD just for this song alone!

As to being an INXS publicist, hahaha!!!