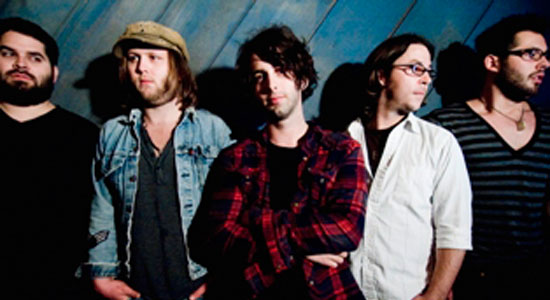 There’s really no other way to describe the music of Texas quintet the Orbans other than to say it’s straight-up, good old-fashioned, catchy-as-hell pop rock. In fact, just one listen to tracks like “Barely Something Known” is all it takes to get it stuck in your head. We can say the same thing about many of the songs that show up on the mix tape bassist Cliff Wright, guitarist Peter Black and keyboardist Justin Pate made for MAGNET. The Orbans’ debut album, When We Were Wild, is out now.

The Flying Burrito Bros. “Christine’s Tune”
Cliff: The quintessential country-rock band. If you love kickass rock with a little bit of twang, this is where it’s at. Fuzzed-out pedal steel takes this tune over the top. Video

The Moondoggies “It’s A Shame, It’s A Pity”
Cliff: A newer band that I’m a big fan of. Loved their first record, and this song off their newest release is very solid. I haven’t had a chance to catch these guys live yet, but I can tell from this video that the three-part harmonies are just as legit live as the studio. Video

Ben Harper And Relentless7 “Skin Thin”
Cliff: Really gorgeous video for a gorgeous song. Ben and R7 are good friends of ours and have been big supporters of ours. Jordan, R7’s drummer, is my best friend and the roommate of the director of this video, Danny Stesson, a super-talented dude. Apparently, they found the girl in the video at the pizza joint she worked at and she had no prior acting experience. Video

The Antlers “Two”
Cliff: These guys make some dreamy indie pop. I love how this song keeps moving but is never too busy. This is definitely on my dream-time playlist. Video

The Sword “Maiden, Mother & Crone”
Cliff: Not sure what to say about this song other than it’s just pure awesomeness. I’ve seen the Sword a couple of times, and while I’m generally not a metal fan anymore, as I was in my teens, these guys are throwbacks to when metal was cool and hip. As a bonus, they don’t play guitars that look like they came from fantasy-knife catalogs. Video

Red House Painters “Have You Forgotten”
Peter: One of my favorite low-key afternoon tunes. Seems like I always come back to this one in the fall months. There isn’t a whole lot going on in the song, so for me, it’s all about the vibe. Video

Andrew Bird “Fake Palindromes”
Peter: Someone sent me this tune back in 2006 to introduce me to Andrew Bird’s music. It may be the coolest violin hook I have ever heard. You have to respect a guy who has mastered several instruments and also writes such intelligible lyrics. Video

Frightened Rabbit “Swim Until You Can’t See Land“
Peter: Thought I would throw one in that I haven’t been listening to for very long. I’m a big fan of tracks, like this one, that ramp up slowly. The singer, Scott Hutchison, has a really interesting voice. For me, interesting voices and creative melodies are always going beat out the text-book vocalist. Video

Jason Falkner “Afraid Himself To Be“
Justin: This is one of my favorite songs in the world. Perfectly constructed and executed, it is a pop masterpiece! Video

Of Montreal “Lysergic Bliss”
Justin: Of Montreal has recently become one of my favorite bands. The quirky genius of Kevin Barnes never ceases to surprise and amaze me! Video