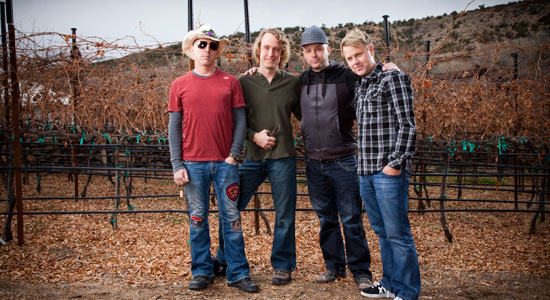 MAGNET’s Matt Ryan files his year-end report, weighing in on the hits from the loud-rock end of the spectrum: Blood Into Wine (pictured), the Sword, Black Tusk, Rosetta and more.

The exact date has been lost to the passage of time and wanton destruction of brain cells, but at some point in the late ’90s—probably 1997 or 1998—the idea was pitched for a MAGNET column devoted to punk, hardcore and metal. Granted, not such a revolutionary concept at the time, but nevertheless an anomaly in the context of a magazine so finely attuned to indie-rock sensibilities. As if to prove the point, an associate editor involved in the vetting process was favorable to the idea on the condition that the column wouldn’t turn into a forum for “Korn, Limp Bizkit and Tool.” This comment was really fucking irritating for two reasons, the first being the implication that any journalist with an IQ over 50 would invest any energy and word count into the already overexposed and preternaturally shitty Korn and Limp Bizkit. The second was the fact that a seasoned music editor was so blithely lumping Tool in with the semi-literate mooks in those other two bands. The more discriminating (and aged) among you may recall that while Limp Bizkit was crassly championing the virtues of female anatomy (“Nookie”) and Korn was lamenting the life of tethered douchebaggery (“Freak On A Leash”), Tool delivered tortured introspection and thinking-man’s misanthropy in a mash-up of metal, art and prog rock. Yes, Tool could rattle your fillings, but from an overall aesthetic viewpoint, the band couldn’t be further apart from the rape rock so de rigueur at the time.

Blood Into Wine DVD [Twinkle Cash Co.]
As if to further illustrate the gulf between the members of Tool and their Coors Light-swilling contemporaries, this year saw Tool frontman Maynard James Keenan turn up in Blood Into Wine, a documentary that tracks Keenan and business partner Eric Glomski in their efforts to establish a beachhead in Arizona for fine winemaking. You need not be an oenophile (or Tool fanatic) to appreciate this terrific little film, which alternates between poignancy and dry comedy. Indeed, when the players get too self-serious or new age-y in a near spiritual pursuit of their craft, the movie will insert bits such as a wine tasting by Patton Oswalt, a mock interview of Keenan by Tim and Eric (of Adult Swim’s Tim And Eric Awesome Show, Great Job!) or a sublimely silly take by Bob Odenkirk as a “French” vintner. Here we also get a glimpse into the psyche of the obsessively press-shy Keenan, a performer (and performance artist) who is nevertheless uncomfortable, even antagonistic (see Tool’s “Hooker With A Penis”), toward the fame and fans that come along with it.

THE SWORD Warp Riders [Kemado]
I’m sick and tired of reading critic and comment-board accusations of hipsterism on the part of the Sword, as if the band’s back-to-roots take on metal with its Herculean riffage and Tolkien-esque lyrical bent is somehow delivered with a heavy dose of irony. Folks, consider for a moment that these guys just may take this shit seriously. (Indeed, in an interview with MAGNET a few years back, Sword singer/guitarist/lyricist J.D. Cronise bristled at the suggestion that the band was at all playing it tongue-in-cheek.) Appropriately, Warp Riders doubles down on the sword and sorcery imagery, albeit with an interstellar twist, while Cronise continues to wrest epic sounds from his guitar. This third installment from the band also hears occasional flashes of hard-rock boogie, making songs like “The Chronomancer I: Hubris” (huh?) crushingly indelible.

BLACK TUSK Taste The Sin [Relapse]
KYLESA Spiral Shadow [Season Of Mist]
If Clint Eastwood’s Midnight In The Garden Of Good And Evil has shaped your impressions of Savannah, Ga., you may think the city is all tree-lined streets, old-money cocktail parties and debutante balls. Which leaves you wondering from what Savannah gutter all of these bruising, sludge-tastic metal bands are crawling. First came the mighty Baroness, appearing in last year’s best-of wrap-up, now followed by Black Tusk and Kylesa in 2010. Of the two, Black Tusk is the more unrepentantly brutal, layering fuzz-drenched guitar atop a booming rhythm section while Andrew Fidler’s grainy shout narrates the assault. Thankfully, unlike many of its doom-y brethren, Black Tusk understands propulsion. Rather than rumbling aimlessly about, these guys drive the likes of the steamrolling “Way Of Horse And Bow” straight into your cranium, splattering brain matter far and wide upon exit. Kylesa also knows how to bring the heavy, but like Baroness, the band can also be sonically eclectic, dropping atmospheric interludes into a metallic onslaught, dosing listeners with a little psych rock before bashing skulls. Also varying the dynamic are the shared vocal duties between Phillip Cope and Laura Pleasants, bringing darkness and light, respectively, to the mix. To apply a familial analogy, Kylesa is the cool, LSD-dropping elder sibling to the delinquent, beer-swilling little brother in Black Tusk.

STEPHEN EGERTON The Seven Degrees Of Stephen Egerton [Paper + Plastick]
How you feel about this solo effort from Stephen Egerton rests solely on your affinity (or lack thereof) for the Descendents and All. For those unwise in the ways of old-school pop/punk, Egerton is the guitarist for the aforementioned bands, therefore his unmistakable six-string stamp is all over this recording. Sixteen tracks feature 16 different vocalists, including Milo and Chad (from Descendents and All, respectively), Tim McIlrath (Rise Against), Chris Demakes (Less Than Jake) and Dan Adriano (Alkaline Trio), just to name a few. Vocal diversity aside, this album is a virtual clinic in the Descendents/All/Blasting Room Studios sound. Some may argue this results in monotony, but a more compelling case can be made for simple quality control. What is without dispute is that each and every one of these tracks is more contagious than a bubonic rat.

ROSETTA A Determinism Of Morality [Translation Loss]
Since 2006’s Galilean Satellites, Philadelphia’s Rosetta has been building a wall of sound that could make Phil Spector quiver with awe and envy. Subtle electronics, layer upon layer of chiming guitars and a widescreen vocal roar make A Determinism Of Morality a swirling vortex where the Cure’s Disintegration collides with noise metal and hardcore. With Isis calling it quits this past year, it’s good to see a band pick up the torch for metal that can simultaneously hypnotize and terrorize.

No Kvelertak, no dice.

I think Torche had an album this year. They are like a stoner rock Chavez. Furthermore, I wonder what the Magnet crowd thinks about European folk metal bands, because I love Magnet and I love folk metal. Elvenking, Kopiklaani, Eluveitie, and Ensiferum. Stellar stuff.