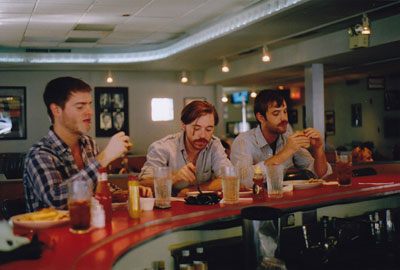 Since 2006, Nashville’s And The Relatives have quietly garnered a steady stream of support from Music City all the way to the far-flung editorial salons of Spin, which in 2009 proclaimed ATR one of “eight undiscovered bands worth a listen.” And deservedly so: The trio’s austere, riff-heavy indie rock, which has drawn comparisons to Pavement, the Walkmen, the Black Keys and Spoon, is a refreshing antidote to the chillwaving listlessness that has defined so much of the music that’s been hotly tipped by critics in recent years. After self-releasing two well-received EPs, the band this year teamed up with YK Records and Theory 8 to release its debut LP, Green Machinery, a fuzzy, rollicking collection that is more sophisticated than it initially lets on. Indeed, just as prevalent as its garage-baked carelessness is an undeniable penchant for songcraft. “Hammer Down,” in particular, has been stuck in our heads for weeks.