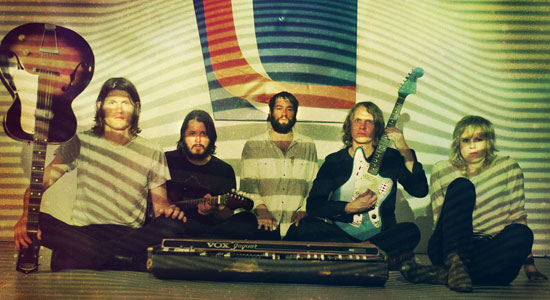 Phosphene Dream, the third album from MAGNET faves the Black Angels, marks a big step forward for the Austin, Texas, psych quintet. The band signed to the Blue Horizon label (run by industry bigwigs Richard Gottehrer and Seymour Stein) and worked in L.A. with veteran producer Dave Sardy (Oasis, Rolling Stones), marking the first time the group recorded an LP outside of its home base. The Black Angels also recently upped their profile with a collaborative appearance with UNKLE on the soundtrack to The Twilight Saga: Eclipse. (We hear the track, “With You In My Head,” is played at a pivotal scene in the film, but when it comes to movies, we are more Black Swan than Bella Swan.) The band also backed Austin legend Roky Erickson (though the fruit of that labor is still up in the air, release-wise) and is still working hard on its annual Austin Psych Fest. And if that wasn’t enough, the Black Angels will be guest editing magnetmagazine.com all week. We recently caught up with vocalist/multi-instrumentalist Alex Maas via email.

MAGNET: Phosphene Dream marks a lot of firsts for you guys: first album with a big-name producer, first one not recorded in your hometown, first one on a big label, etc. How come you chose to do everything differently this time around?
Maas: We wanted to try something new. When we heard that it was actually an option to work with Dave, it intrigued us. He flew into Austin riding a big Black Hawk, and that nearly convinced us that he was the guy. He had similar tastes as us, knew about anti-gravity and was psychedelically encouraging to us. We liked the idea of working with a modern-day George Martin but never meet one until then. He seemed like an old friend when we meet him. It started to make even more sense. He had our trust.

What was working with Dave like? Did he have any good Oasis fight stories or any dirt on Mick and Keith?
It was great working with him. We trusted his ideas, and he encouraged us to push ourselves. None of the dirt or fight stories can be disclosed here at this juncture. I’m sorry. We signed a disclosure agreement.

Phosphene Dream was recorded over a period of six months in L.A. Did you spend all that time in L.A. working on the album or did you do multiple sessions over the course of that time?
Dave’s wife had a baby during our session, so it put everything on hold for a while until he was available. It was a good thing in the end because we were able to sit with the record and let it marinate for a while before we finished it.

A lot of your music seems like a perfect fit for movies/TV/games/etc., and it has already been featured in a number of them. Any interest in writing music for specific visual projects in the future?
I love visual projects. The songwriting process for us is highly based on imagery and sonically describing what we see in our heads. The future is wide open.

How did you hook up with UNKLE for “With You In My Head” on the Twilight soundtrack?
We had worked with UNKLE previously on their latest record, on a song called “Natural Selection.” When the movie people called (James) Lavelle, he called us. Not trying to oversimplify it, but that’s kind of what happened.

Did you find that such a high-profile gig had any big effect on the band’s popularity?
Of course. Our name was attached to one of the biggest soundtracks of the year, but I do think our track was overshadowed by the other huge names on the soundtrack.

You guys have toured with Black Mountain, the Black Keys and Black Rebel Motorcycle Club. What other Black bands do you want to hit the road with? Who is your favorite Black band?
It has to be Wu-Tang Clan.

Between your name and your logo, you guys clearly decided to wear your love of the Velvet Underground on your sleeves. Are they the biggest influence on the band?
Musically, they are a great band. They inspired us and influenced us 33 percent more than any other band. Things we learned from them: Less is more, drugs make you egotistical, androgyny is awesome. It’s never too late to pay homage to those who have inspired you.

You guys backed Roky Erickson a few years ago, and I thought there might be further collaboration in the future, but he’s been playing with Okkervil River recently. Think you and he will do more stuff together?
We were given 60 unreleased Roky tracks. Of those, we chose 10 of our faves. Five of the 10 tracks we chose ended up on the Okkervil/Roky record.  Our versions will be released some point on our dime and on our time. When we collaborated with him, we wanted to make the lost Elevators album. We made them fuzzy, psychedelic, jug-laden and swampy. We just figured no one wanted to hear our versions of the tracks when we saw Roky’s record with Okkervil. It burned a little, but we will eventually release our versions.

Your annual Austin Psych Fest turns four this year, and it seems to get bigger each time. Do you plan on continuing to do it every year?
Oh yes. It’s a lot of work. We are looking at the ATP business model for inspiration. This is a festival for the fans.

How involved are you guys in the entire process of it?
The Black Angels and the Reverberation Appreciation Society work together with the fans to throw the event. To become a member of the RAS, go here.

What is in store for you guys in 2011?
We are headed to Europe in February. We may play a show or two during SXSW, then its back to the studio, son!