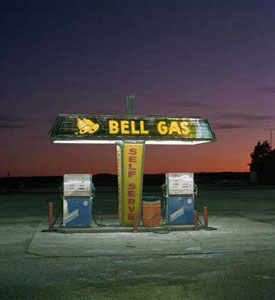 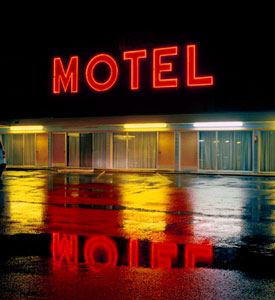 Cornog: Back in 1999, I used to hang out at a Barnes & Noble bookstore in Union, N.J. In those pre-Kindle, pre-iPad, pre-Nook days, this store was fully stocked with art and photography books that were a little off the beaten path, not just the “hits.” That’s where I came across a book called Highway: America’s Endless Dream and the photography of Jeff Brouws. What initially attracted me to Brouws’ work was what I can only describe as “beautiful decay.” His photographs reminded me of my father and me whizzing along in an old Chevy Impala, past the cheap, neon-lit landscapes of my youth. But that reaction was just a surface reading. On a deeper level, his photographs reminded me of the darker side of the American dream. Brouws’ photos asked questions. Were unbridled freedom, capitalism and the myth of the open road good things? Or were they just traps you could fall into? Were these iconic American ideas liberating us? Or were they merely leading us into a no man’s land?