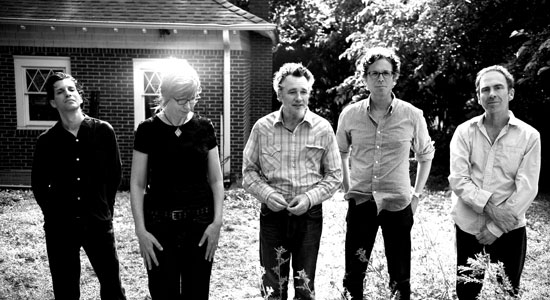 Gary Louris and Mark Olson left Jayhawks fans in a lurch when they parted ways rather abruptly in 1995. Turns out Olson had tired of all the obligations and trappings that came with the Minneapolis-spawned group’s hard-won success. So he escaped to the Mojave Desert to ply a rootsier, salt-of-the-earth trade with the help of wife Victoria Williams. Ah, but time—and perhaps a little fiscal motivation—has a way of smoothing over the rough patches in many productive creative partnerships. (Unless you’re Bob Mould and Grant Hart.) And 15 years later, the Jayhawks have returned to us more-or-less fully intact. For how long, no one really knows, but they just did a string of shows to back the enhanced reissues of 1992’s Hollywood Town Hall and 1995’s Tomorrow The Green Grass (American/Legacy). With their sugary (if unrefined) harmonies, rugged intelligence and casual accessibility, the albums are to the alt-country movement what One Of These Nights and Hotel California were to ’70s SoCal country rock—even if the comparably modest sales figures may not indicate as much. Louris chimes in on the Jayhawks’ recent resurgence below. He and Olson will be guest editing magnetmagazine.com all week.

MAGNET: Where did the Jayhawks fall in the prodigious flow of post-punk music coming out of the Twin Cities in the ’80s and ’90s?
Louris: It was the mid-’80s when it hit with the Replacements and Hüsker Dü. We came along a little later. Run Westy Run, Soul Asylum and the Jayhawks hung out a lot together. Hüsker Dü and the Replacements were one step further along, so they were always on tour. In a funny way, they made us who we are, because we said, “Well, that’s been done. Let’s do something else.” We found our own little niche. Olson and I fell in love with American music forms at the same time, and we just mixed that in.

He was playing standup bass in another band when you met, correct?
We were involved in this big battle to be the best rockabilly band in town. He was in Stagger Lee, and I was in Safety Last. And, I’m sorry, but Safety Last was just a little bit better. [Laughs] I remember him coming down the stairs with his standup bass to audition for us. That’s when I first started knowing him. We eventually got out of rockabilly. It’s fun to play and drink beer to, but it’s really limiting for a songwriter.

Why did Olson wind up leaving the band?
He was tired of the grind of playing the game, going to the radio stations and being a low- to mid-level success. I think it just wore him out. He was always frustrated by all the waiting. The Jayhawks made just seven records in 20 years, so there was a lot of it. The Creekdippers did it very organically and made lots of records. But the main thing was that he wanted to be with his wife.

If Mark had stayed with the Jayhawks, would the band have gone in the direction it did with Sound Of Lies and Smile?
Probably not. I didn’t grow up listing to Merle Haggard and George Jones; I grew up listening to Brian Eno, the Clash, the Kinks, the Beatles. And I was into experimental music like Can and Faust. At that time, (the idea behind) Sound Of Lies was like, “Why not? What do we have to lose?” It was our Yankee Hotel Foxtrot, only we didn’t get a movie made about it. But Mark wasn’t exactly holding us back. He can get weird, too.

And Smile was a full-fledged pop album.
Yeah, I think we were just going for it there. Sound Of Lies was dark. I was getting divorced; Olson had left. For Smile, I was married and had a new kid. We got out there with some electronic stuff, and it was fun. It’s the period I remember as being the most out-there (onstage)—as far as jumping into the crowd, riding on the back of my guitar tech through the crowd, letting loose and being the rock god.

Smile had to be disconcerting to some fans.
Oh yeah. People either love it or they don’t. What I remember from that period is that our crowd changed in an interesting way. A lot more girls—and a slightly younger audience—started coming to our shows.

What brought you and Mark back together?
It started way back with The Rookie, a mediocre Dennis Quaid movie about an older pitcher who makes the big leagues. The producer or the director was a Jayhawks fan, and they wanted a new Olson/Louris song. Olson’s manager called my manager, and the next thing you know, I’m driving out to Joshua Tree. We talked through our old issues. We wrote a couple of songs that day. They didn’t make it in the movie, but it got us thinking that we still really had something when we got together. So we started doing some tours, but we didn’t have any new material, so that lead us to Ready For The Flood, and that led us to the new Jayhawks record.

What about the new the album?
The plan was: Let’s pick up where we left off after Tomorrow The Green Grass. We set out to make an album for the fans, and I think we did. But we’re definitely a little different now, so it’s not cookie-cutter. It’s rockin’. It’s plugged in. It’s not Ready For The Flood. It’s got great energy to it, some real simple songs and songs that are like six parts. We recorded 18 songs; 16 were new, and 12 made the record. It’ll be out in late spring or early summer.

Does it have a name yet?
No, it doesn’t. We’ve never been a band that’s had the title ahead of time.

Tomorrow The Green Grass was named after a song that didn’t even make the album.
Yeah, I know, I know. So I’m thinking one these b-sides might be the album title.