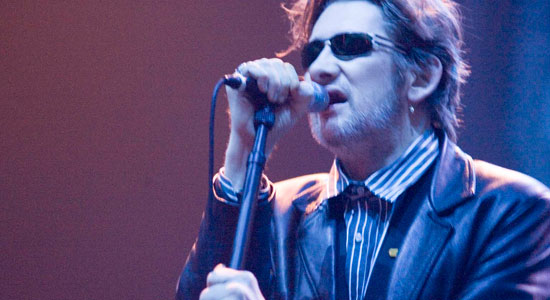 The fact that the classic lineup of the Pogues performed at the Congress Theater in Chicago on Thursday night mattered more to some folks than it did to others. Winding up their “final” tour, dubbed “A Parting Glass With The Pogues,” the whiskey-soaked soldiers of fortune played like their lives depended on it, one more time.

A shambling-but-upright Shane MacGowan, reunited with his original bandmates, gave life to the songs that have served them now for decades—not new life, but affirmation of a life chosen and a life led. Alcohol is one major subtext here, as MacGowan’s lifelong commitment to drinking (and drugs) has ravaged him to an extreme. Moreover, the band’s Irish-traditional aesthetic has led all of its members down roads of similar excess, both individually and collectively, and not without great cost.

So, what else can one do but raise a glass and salute these unrepentant alcoholics and empathize with their decision to play music together a little while longer. The Pogues started out slow and gained strength and spirit as the night progressed, and the musicianship and determination powered them through amazing songs like “Lullaby Of London,” “And The Band Played Waltzing Matilda” and “Bottle Of Smoke.”

The mosh pit in front was fairly mild, but there was still plenty of crowd-surfing and body-slamming. The band’s punk-rock two-step—generated by James Fearnley’s churning accordion along with the veteran picking and strumming of Philip Chevron, Jon Finer and Terry Woods—walked the line between focus and frenzy as MacGowan provided iconic shrieks on “If I Should Fall From Grace With God” and moving vocals on slower, emotional tunes like “A Pair Of Brown Eyes” and “Dirty Old Town.”

Before closing the show with even more classic drinking songs like “Poor Paddy” and a rousing “Fiesta,” whistle player Spider Stacy acknowledged that hitting his head with a beer tray in time to the music was now against doctor’s orders. It was a strangely bittersweet moment, emphasizing that the Pouges’ “farewell” tour might actually be their last, only because some of these guys might really be on their last legs.

But for the night, the brave men onstage were kicking against the pricks in true punk/troubadour fashion. Or, as someone else standing at the bar once said, “Pogue Mahone!”

Every word is true!