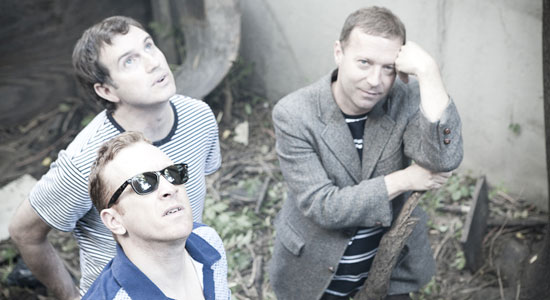 Nothing if not a model of consistency, Buffalo Tom has been making the same decent-to-great music since 1992’s Let Me Come Over. Actually the Massachusetts trio’s third album, Let Me Come Over feels more like a debut, as it zeroed in brilliantly on the group’s strengths, namely the earnest, imagery-laden, acoustic-gone-electric songwriting of guitarist Bill Janovitz and bassist Chris Colbourn and the propulsive punk undercurrents supplied by drummer Tom Maginnis. Judging by the band’s latest, Skins (Scrawny), it’s a formula that still has legs. Skins is the group’s eighth album and second since reuniting after a 10-year (sort-of) break, and its world-weary lilt and been-there/done-that themes make it the perfect grown-up companion piece to Let Me Come Over’s reluctant coming-of-age angst. It may be the best thing the band has done since that LP—and far be it from Janovitz and Colbourn to disagree. Buffalo Tom will also be guest editing magnetmagazine.com all week.

MAGNET: Buffalo Tom stopped making albums for almost 10 years. After a devoting at least a decade to the band, how did you guys keep busy all that time?
Colbourn: There’s a short story by Kafka called “The Hunger Artist.” There’s this one guy that everyone forgets about, and he’s still there in the corner months later. We’re “the hunger artist.” We kept recording through that whole period and playing. We worked consistently on the songs for (2007’s) Three Easy Pieces and this record throughout that whole time period. But we also had lots of kids being born. Time just kind of flew by.
Janovitz: It took us a long time to get back into the flow, because we did decide to take a little break. But there was never really a breakup, a walking away and a reuniting, though it might’ve been a better business move to do that. [Laughs]

Three Easy Pieces sounds like three guys having a blast making noise together again.
Janovitz: Old guys happy to be in a rock band.

But Skins is a decidedly more somber affair.
Colbourn: It’s kind of dark.
Janovitz: I do see a more unified element on this record. Our songs have very rarely been autobiographical or confessional, but these new tunes are fairly accurate glimpses into our lives—very reflective of guys being in their 40s. Like “Don’t Forget Me”; it’s kind of a sad-sounding song, but it’s really just about finding a good place in your life. It’s funny, with a lot of these things, I almost feel like I’m going through a midlife crisis. You reach this point where you have friends who are going and all these kids coming in, and you find this new perspective. Look at Tom Waits; some of the deepest, most moving music he’s done came later in life. There’s a distinct domestic flavor to many of the songs on Skins, especially the ones by Chris. But I wouldn’t call it domestic bliss, by any means.
Colbourn: I tend to like a sad song, and I’ll reach into whatever’s there. I don’t shy way from real things in life.

Chris’ role seems more substantial on Skins, perhaps more so than on any other album by the band.
Janovitz: When we started out, I had a notebook of songs. Then Chris started writing more and more stuff and bringing it to the band. That’s been the case even more so in the last two years. Chris and I have never sat in a room and wrote a song together on acoustic guitars. We aren’t like Lennon and McCartney. In many ways, we’re not like Lennon and McCartney. [Laughs]

Tanya Donelly (Throwing Muses, Breeders, Belly) sings on “Don’t Forget Me,” and Paul Kolderie mixed the album. Have you stayed in touch with others in the Fort Apache Studios crowd over the years?
Janovitz: I literally met Tanya for the first time somewhere in Germany. Now she lives five minutes from my house. Our daughters were born the same month, and they’re buddies. It was really when we all settled down at home that we became really good friends.

Were you close with any of the other luminaries in the late-’80s/early-’90s New England scene?
Colbourn: Everyone was so busy. I almost never saw J Mascis or Evan Dando here. I was much more likely to run into them in London or Berlin on tour. There was never a local place where everybody went and jammed. We were on SST Records, and I really didn’t feel a part of that scene. Then we were on Beggars Banquet, and I didn’t feel a part of that scene.

Even now, critics—including yours truly—seem to be at a loss for words when trying to label your sound. It’s quite unique while still sounding oddly familiar. And while it’s evolved over the years, it really hasn’t changed all that much. Could you shed some light on the matter?
Colbourn: The blueprint is really in the Stones—in the era of the tube guitar amp and slightly distorted ’60s guitars, which we still play.
Janovitz: We were guys who liked the artsy things from the punk era, but we weren’t necessarily hardcore fans. We’d go see Echo & The Bunnymen a lot, and we were into the Joy Division stuff. We were just a product of our record collections.
Colbourn: The truth is, the whole “Dinosaur Jr Jr.” thing was not really that accurate. At the end of day, we fall much more into the singer/songwriter kind of world.

3 replies on “Q&A With Buffalo Tom”

I’ve loved every phase of Janovitz’s career, from loud and melodic Buffalo Tom shows, to seeing Bill rake the strings off his acoustic guitar in a solo opening set for Neko Case in Toronto.

let me come over, big red letter day, and sleepy eyed are three of the best records ever made 🙂 Taillights fade is one of the best songs ever written. I think they sort of lost the plot a little for the past few records, but I’m looking forward to the new one.

[…] Magnet has a Q&A with Buffalo Tom, which can only mean that the Bostonians are taking over the editorial chair for the next week. The Boston Herald and Writers On Process also have interviews with the band, whose new record Skins is out today. […]