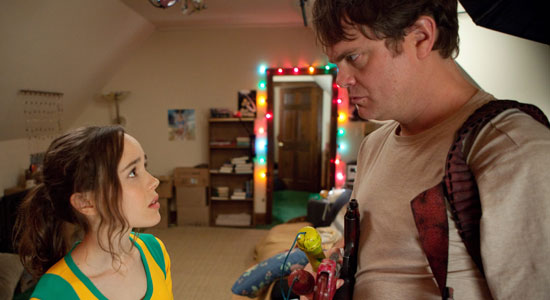 MAGNET’s Mitch Myers files his second round of notes from SXSW.

Director James Gunn is over-the-top crazy—as a screenwriter, he worked on the Dawn Of The Dead remake and Scooby-Doo 2: Monsters Unleashed, and he directed box-office flop Slither—all of which makes him an ideal filmmaker to showcase at SXSW. Gunn’s insane new movie, Super, stars Rainn Wilson, Ellen Page, Liv Tyler and Kevin Bacon. It’s a low-budget comedy about a desperate misfit who remakes himself as a superhero. He’s pathetic, deluded and vengeful, but our hero’s newfound clarion call is simply, “Shut up, crime!”

The idea of some misguided loser with a young female sidekick killing and maiming bad guys is similar to last year’s SXSW buzz-flick Kickass, but Kickass wore green and Wilson’s costume is all red, so there. Like Kickass, the violence in Super is hardcore, but Wilson’s Frank (the Crimson Bolt) and Page’s Libby (his sidekick, Boltie) are truly hilarious as unhinged crime fighters thrown together by fate. The Crimson Bolt’s secret weapon is a big metal wrench, which he uses to viciously club drug dealers and child molesters, but he gets carried away and soon maims a rude couple just for cutting in line at the movie theater.

Page is the real scene-stealer here, and her nervy, over-stimulated character eventually seduces/rapes her repressed partner before they head off to save Frank’s drug-addicted wife (Tyler) from baddie Jacques (Bacon). While not terribly original, Gunn deftly turns the superhero genre upside down. He also mocks hallucinating, schizoid, super-religious bible thumpers and a whole lot more. Not for the squeamish or the square, this flick is probably destined for transgressive, cult-classic status. For the rest of us mere mortals, Super it is just OK.

On a more sentimental side, A Bag Of Hammers, starring Jake Sandvig and Jason Ritter, is a gentle tale about a pair of conniving young scammers living on their own, but whose criminal lives are irreversibly changed by the appearance of a neglected young boy. With benign humor and a subtle moral center, A Bag Of Hammers starts out looking like a slacker farce but ends up tugging at one’s heartstrings, showing the power of love and how people can create their own families in lieu of circumstance, tragedy and necessity. Ritter is especially good here, but the entire cast makes this flick a sweet little joyride with a happy-if-predictable ending.

Finally, the impressionistic documentary about John Mellancamp. It’s About You is a sleepy little film made by a father-and-son team who were allowed to tag along on Mellancamp’s 2009 tour with Willie Nelson and Bob Dylan. Following Mellancamp, his band and producer T Bone Burnett, we watch the middle-aged rocker recording his most recent album at places like Sun Studios in Memphis and the same room at the Gunter Hotel in San Antonio where Robert Johnson made his classic recordings all those decades ago.

The screening was energized at the end of the night with a surprise appearance by Mellencamp, who humbly answered some questions and endorsed the film as an accurate depiction of his life on the road at this point in his long career. The insights provided were slim, but using his Super-8 handheld camera, filmmaker Kurt Markus also comments on the crumbling infrastructure of America, showing the abandoned downtown areas of Memphis and the like. Sadly, there’s no trace of Mellancamp’s new girlfriend, Meg Ryan, but fans of the Heartland’s favorite rocker will find something worthwhile to take from this thoughtful, modest film.