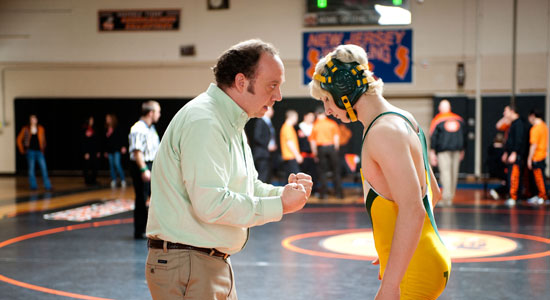 MAGNET’s Mitch Myers files his fourth round of notes from SXSW.

The new Thomas McCarthy film, Win Win, opens in theaters this weekend. Not only that, you can already download the thing directly from the Internet. SXSW often shows mainstream movies as part of its programming, and this film will definitely have that wide appeal. This is due especially to the presence of actor Paul Giamatti, who consciously underplays his role as a hardworking family guy having trouble making ends meet who makes a morally ambiguous choice in effort to pay the bills.

This is a subtle film, where attorney Mike Flaherty (Giamatti), takes over the guardianship of an elderly client for the money and ends up dealing with a lot more than he bargained for. He’s also a wrestling coach for a losing high-school team, and when his client’s wayward grandson Kyle (first-time actor Alex Shaffer) shows up and happens to be a wrestling whiz, it looks like this is going to be The Blind Side all the way. It isn’t a sports story of winning in the traditional sense—rather it’s a tale of trust, honesty and love emerging as the true motivators in life.

Jeffrey Tambor and Bobby Cannavale provide some comic relief as Flaherty’s assistant coaches, and Shaffer is remarkably low key in his role as the neglected teen. Amy Ryan brings much-needed intensity to the film as Mike’s New Jersey wife with a strong sense of right and wrong, but this is a slow-moving film that unfolds gradually until the final resolution. So don’t be fooled by the trailers with Giamatti shouting encouragement to his protégé on the wrestling mat. This is about people learning to live together—and also how to live with yourself.

More to my own liking was Werner Herzog’s new documentary, Cave Of Forgotten Dreams. A mesmerizing 3D film where Herzog and his four-person crew take us into the Chauvet caves in France, where there are cave paintings made by early man approximately 35,000 years ago. A rockslide enclosed this area about 20,000 years ago, and the insides were hermetically sealed, preserving the amazing contents so they look like they were created just last week. The interesting thing is that the more one examines the fascinating cave drawings and their vast implications, the more unbelievable it is.

The ancient artist responsible for these drawings of lions, mammoths, rhinoceros and bison had an amazing aesthetic, providing a sense of movement and depth with a sophistication that is hard to fathom. By interviewing archeologists and other people of science, Herzog helps us imagine what possible circumstance would have led to such an artistic gesture so long ago. We’re even given a sense of the caveman, how tall he was and the type of environmental experience he was trying to evoke. Herzog himself is obviously quite inspired and waxes philosophically as to the nature of ancient man and existence in the world at that time.

Cave Of Forgotten Dreams is educational and inspirational, and it has a meditative film score that accentuates the mystical nature of Herzog’s private tour. The epilogue features some “radioactive albino crocodiles” living in a nearby greenhouse next to a nuclear reactor, making his cinematic sojourn even more surreal. You don’t have to be a history buff to enjoy this, and the pristine cinematography is a trip unto itself. So strap on the 3D glasses and head back in time with Werner Herzog, you won’t be sorry.