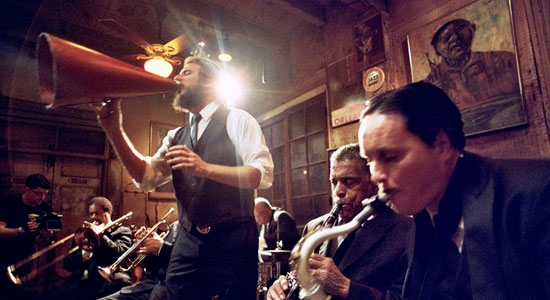 MAGNET’s Mitch Myers files his sixth round of notes from SXSW.

SXSW is reigning down with full force now. The crowds are massive, and the density of party action is almost beyond reason. So, what else is there to do in Texas but celebrate New Orleans-style? Director Danny Clinch ensured a little bit of the French Quarter was delivered to Austin on Thursday with the screening of his new documentary film Live At Preservation Hall: Louisiana Fairytale. Clinch’s movie focuses on New Orleans jazz traditions, specifically the guys in the Preservation Hall Jazz Band, who have been playing music at 726 St. Peter Street in the French Quarter since the early ’60s.

Part of the New Orleans jazz tradition is to collaborate while moving forward; in this case, it meant the Preservation Hall group joined forces with Jim James and his band, My Morning Jacket. This pairing isn’t as unlikely as it first sounds, and Clinch did an expert job capturing the meeting of the two ensembles and their exciting, intimate performance down on St Peter Street. We also learn the history of the Preservation Hall and its members, gain insights into their musical lifestyle and watch the visiting members of My Morning Jacket absorb some of their enchantment.

To set the tone just before the film’s screening, Clinch wisely summoned the spirit of New Orleans down in Austin as the Preservation Hall Jazz Band suddenly appeared and circled the street in front of the Paramount Theater, playing a moving, grooving second-line parade for the waiting moviegoers and passers-by. The parade then continued inside the theater, which led to a dynamic performance of “St James Infirmary,” with a suit-clad James singing and moaning and throwing himself up against the theater seats and along the front of the stage. It’s clear that the musicians from the two groups had a great deal of respect for one another, and this movie is more of a celebration of the summit than anything else. Photographer Clinch is certainly growing as a director—he’s made concert films showcasing bands like Pearl Jam and John Mayer—and this might be his best yet.

After watching Louisiana Fairytale, there wasn’t anything else to do that made sense except go see live music, so I did. North Mississippi Allstars played a semi-private gig at the indoor room at Stubb’s, and it was burning. Guitarist Luther Dickinson, drummer/brother Cody Dickinson and big, bad bassist Chris Chew played an uncompromising set of retro-styled psychedelic blues rock to a dancing crowd of revelers. Luther, fresh from his stint in the now-retired Black Crowes, put on an exhibition—picking leads, blazing on his slide guitar and leaning hard on the distortion pedals. Luther also mentioned something to the effect of, “Screw those SXSW showcases,” and the band played an authentic 70-minute set instead of the standard 40-minute time slot. Luther even invited G. Love to get up and perform “Mean Old World” with the band. The amazing gig was over by 7:15, and the SXSW night was only beginning.