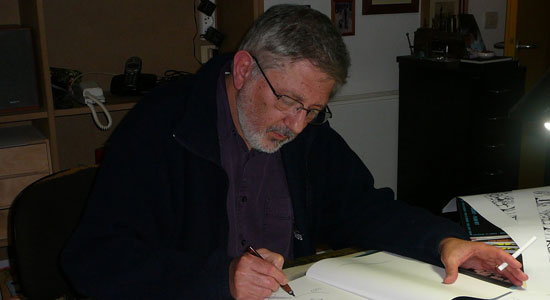 Cockburn: Back in the ’70s, I became interested in comics again. As a kid, I loved Tarzan and bought every issue for several years running. I lost interest in my teens, but it was reawakened when I discovered the French and Belgian bandes dessinées. These were comics with far better production values and a more adult orientation: sci-fi or fantasy stories, gritty noir detective tales, perverted humor. There was a whole world waiting to be savored in the union of story and dialogue with really good graphic art of many styles. Moebius, Hugo Pratt, Bilal & Christin and Jacques Tardi in particular lit up my imagination.

Over the years, some of the work of these artists has appeared in English, usually as a cheaper production and often with really bad translations. One of my favorites was Tardi’s series about a female private detective in fin-de-siecle Paris named Adèle Blanc-Sec. Fantagraphics has now released some of the Adèle stories in a form worthy of the original editions. They’ve put out other Tardi titles as well. This is exciting, even if I have them at home in French. It’s fun to think of a whole new audience discovering the work of such a great graphic novelist!