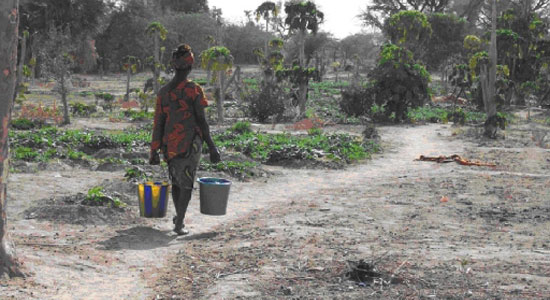 Cockburn: There was only one public latrine in the village. It was at the foot of the valley, below the ritually placed Dogon houses, where the spring’s ability to generate green vegetation came to an end at the dry plain of the Sahara. The structure was built up above ground: a mound of red earth 10 feet high shaped like a protruding navel. Finding myself in need of it, I went through the entrance to discover that I had to climb a short stair. This put me on a platform surrounded by an uneven, three-foot wall. As I squatted there with my head sticking up above the parapet, I felt extremely conspicuous. I wondered if I’d have to greet passersby from my elevated position, but the one or two women I could see hoeing in their garden ignored me.

I had a fine view of the surroundings. On one side, at my back, the looming 2,000-foot ramparts of the Bandiagara Escarpment. On the other, sand, thorns, the skeletons of dead baobab trees. Right where the patchwork of little-tilled fields hit the sand was a well spout from which water dribbled into a concrete trough. Nearby, a rectangle of chain-link fence stood next to a small house. While I watched, a wide column of dust approached that resolved itself into into a robed Peul herdsman driving a bleating, clanking crowd of sheep and goats. The animals rushed to the trough by the well, excited to be able to drink.

Startlingly blue sky. Red dust on the wind. This biblical scene of herder and flock. And if the shiny chain-link fence were not anomalous enough, inside it was a large array of solar panels, gleaming a darker blue.

I found out later that a former government had bought into the technology and installed a solar-powered well pump near each of the Dogon villages, dotting the escarpment. No ongoing tech support was given, so the systems broke down. Goats smashed the solar panels. This was the only one still working. The villagers had appointed a man to be trained in well maintenance. The little house was his, and he was charged with keeping everything running. When the well keeper grew too old, he passed on his knowledge to an apprentice in the traditional fashion.

For a fee of a few cents a year, the nomadic herders of the plain could water their livestock here. Back in the day, the Dogon and the Peul were mortal enemies, in the manner of farmers vs. herders the world over. They were enemies until France colonized Mali with cannons and forced peace on them 100 years ago. Now they coexist as partners facing ever-deepening desertification of the environment in which both must live.