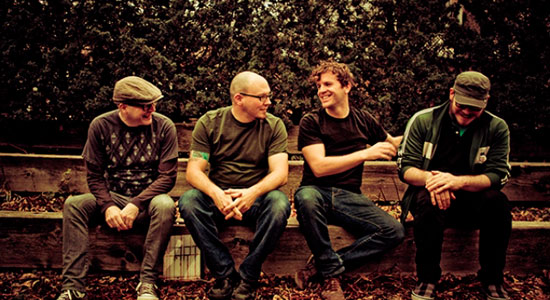 Aside from having the coolest name of any punk-leaning Chicago-area band since Big Black, Smoking Popes have been blessed with core fan base that refused to quit on the outfit. When leader Josh Caterer pulled the plug on the Popes in 1998, it came little more than a year after releasing what might have been the group’s best album, Destination Failure, perplexing many but apparently offending few. Seven years later, a sold-out reunion show in the Popes’ Windy City hometown was all it took to get Caterer back in a creative mood. From there, Josh and brothers Matt (bass) and Eli (guitar) pretty much picked up where they left off, releasing Stay Down in 2008 and compilation It’s Been A Long Day last year. The new This Is Only A Test (Asian Man) is a concept album that only occasionally comes across as such, with the 38-year-old Josh taking on the role of an angsty teenager to convincing effect. Josh and Matt will be guest-editing magnetmagazine.com all week. We recently caught up with Josh.

MAGNET: Are you married? Kids?
Josh Caterer: I’ve been married to Stefanie for 16 years. We have a 10-year-old son and a five-year-old daughter.

Things have changed quite a bit since you were in high school. How were you able to write so convincingly from that perspective on This Is Only A Test. What gave you the idea?
I heard a song by some teenage pop star; I can’t remember the tune. But it got me thinking about how I’d never tried to write from an explicitly teenage point of view. Even when I was a teenager, I always tried to seem more mature than I really was. So I thought, “Wouldn’t it be funny, now that I’m in my 30s, if I started writing about teenage life?” And then all these song ideas started coming at me. I pictured this kid who became the main character for the album, and I put myself in his shoes and asked myself what kind of things he would care about. Then the songs came pretty quickly.

Literally and otherwise, how do the Smoking Popes of 2011 differ from the Smoking Popes of, say, 1993?
In 1993, my idea of a good time was sitting in the basement smoking cigarettes, drinking Mountain Dew and listening to music all night. Now I don’t smoke, I don’t drink Mountain Dew, and I try to get a good night’s sleep. But I would say the most noticeable difference in the band is that we enjoy what we’re doing a lot more than we used to. The 2011 version of the Popes is a lot more fun than the 1993 version.

Three-quarters of the band is family. Did the make it easier or harder to reunite?
My brothers and I had a pretty good relationship during the years when the band was broken up, so it wasn’t very hard for us to start playing again. It’s not like we had issues with each other and needed to bury the hatchet or anything. We just had to decide we were ready to give the band another try. Actually, I think being brothers has always helped us function as a band. We get along pretty well.

Over the years, the two constants in your work are an uncanny sense of melody and that unique, vaguely theatrical croon of yours. Would you consider Smoking Popes a pop band first and a punk band second, or the opposite?
Melody has always been supremely important to me as a songwriter. The melody should drive the song and the chords should come underneath to support it. Maybe that makes us more of a pop band at heart. But our approach to instrumentation tends to make it feel like punk music. So I’d say the Smoking Popes are like musical fondue: a chunk of raw pop dipped in a steaming pot of punk.

As for your singing, I’ve heard it’s reflective of a love of big-band music. Yet your delivery is never mannered or gimmicky.
Thanks. I’m a big fan of Frank Sinatra and Mel Torme; they were both amazing interpretive singers. Neither of them was mannered or gimmicky; they were both serious about the craft of singing, about using their voice as an expressive instrument. It’s not schmaltzy or anything. It’s just good music.

My favorite moment—vocally and otherwise—on the new album is the final track, the largely acoustic “Letter To Emily.” It has a certain “Hey There Delilah” vibe, and yet it couldn’t be about anything more harrowing: teen suicide. Was it inspired by anyone in particular?
There were a couple kids from my school who ended up killing themselves, but the song wasn’t inspired by any one person. The whole issue of teen suicide is so devastating. I hear stories about it in the news, and it just breaks my heart. I think of all the people who are affected by it—people left with a sense of guilt, asking “Is there something I could have done?” And so, Emily is a girl who our main character didn’t know very well. A girl who sat behind him in one of his classes, and he hardly ever talked to her, and now he’s wondering if he had reached out to her if he could have helped her somehow. So he writes her a letter and tries to work through some of those feelings.

Not everything on the album is so bleak. “College,” “I’ve Got Mono” and “Excuse Me, Coach” have a certain twisted humor and wistful charm. For the most part, actually, you seem to make a concerted effort not to get too analytical or high-minded—to keep everything at a level your protagonist can grasp, intellectually and emotionally.
There definitely is a sense of humor to some of these songs. One of the benefits of age is that you get a better perspective on things and you can see that some of the stuff you were so worked up about is actually kind of funny. Aside from the entertainment value, I hope it’s actually helpful to some people. I remember in 1995, right after we signed to Capitol, we were on tour in California and Billie Joe from Green Day invited us over to his house. We spent a couple hours sitting around in his basement. He had a recording studio down there. He played us some demos he’d been working on. It was cool, but I wasn’t feeling too great about life those days and I don’t remember saying very much. I must have seemed pretty depressed. When we were leaving, I was the last one out the door, and just as I was walking out, Billie Joe said “Hey, Josh.” So I turned around and he said, “Don’t let all this stuff get you down.”  I was pretty encouraged by it. That’s my message to every teenager who hears this record: “Don’t let all this stuff get you down.”

What were you up to during the Smoking Popes’ extended hiatus?
I became a father, for one thing. That’s pretty huge. I also played for a few years in a band called Duvall. It was very similar to the Popes, but with Christian lyrics. We put out an album called Volume & Density on Asian Man Records and also a Christmas album called O Holy Night.

Were you shocked by the enthusiastic fan response to the band’s 2005 reunion?
Yes. We didn’t know quite what to expect. We knew we had some diehard fans out there, but we were pretty surprised to see how much our fan base had actually grown while we were broken up—especially when we went out on the road. We went back to towns where we didn’t have much of a draw back in the ’90s, and now we were packing those clubs. We were like, “What happened? Somebody’s been doing PR for us while we were sleeping.”

What’s your take on the state of the music industry now vs. the mid-’90s, when the Popes were signed to Capitol.
It’s cool because you don’t need a big label to reach people with your music anymore. Technology has made it easier for bands to do it themselves, which is great. It gives you a lot more freedom to be who you are and do things your own way. You don’t have to sell your soul to the man. You just gotta get out there and rock.