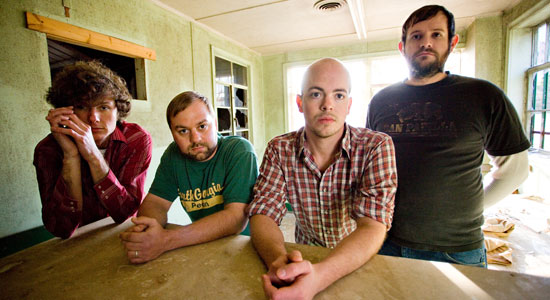 Ninja Gun hails from Valdosta, Ga., and has shared stages with the likes of Against Me! and the Gaslight Anthem. On April 12, the band is releasing Roman Nose (Sabot Productions), a four-song EP that’s the follow-up to 2008 full-length Restless Rubes. Ninja Gun has an April 8 record-release show planned at The Atlantic in Gainesville, Fla., and you can download Roman Nose track “That’s Not What I Heard” below. Says vocalist/guitarist Johnathan Coody of the song, “[It’s] sonically the most pop thing we’ve ever done, but lyrically it’s the most punk-rock thing we’ve written. That was by design. I wanted it to be a super-melodic, textured song but with a really direct message. It’s a spring-break-style pop jam about corporate manipulation of poor people.” MAGNET is proud to premiere “That’s Not What I Heard” below.

This song is awesome! I want more

I love this song. Just stumbled across it online. Where can I find the entire album?

[…] pop rock band Ninja Gun have posted a new song entitled “That’s Not What I Heard.” […]

Wow, this is the first time hearing of you guys, but I am sure it’s not the last….