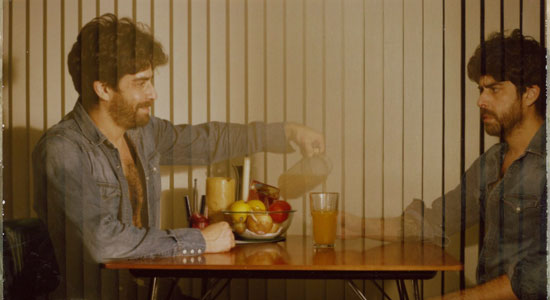 The Goldberg Sisters is the new musical project from Adam Goldberg, the always entertaining actor/filmmaker whose impressive resume includes the likes of Saving Private Ryan, Dazed And Confused, Friends, Entourage, Zodiac, 2 Days In Paris and the Flaming Lips’ Christmas On Mars. The band’s 10-track, self-titled album (on Apology Music/Play It Again Sam) follows Goldberg’s 2009 musical debut, Eros And Omissions, released under the moniker LANDy. As with that project, The Goldberg Sisters finds Goldberg collaborating with Aaron Espinoza (Earlimart, Admiral Radley), though this time out, the duo was assisted by a handful of other musicians, including Goldberg’s girlfriend Roxanne Daner on violin. The result is a satisfying collection of effects-heavy, urbane psychedelia held together by Goldberg’s high-pitched, Lennon-esque croon. Goldberg will be guest editing magnetmagazine.com all week. We recently caught up with him via email after a long day shooting new CBS cop drama Rookies, which is being executive produced by Robert De Niro and Richard Price.

MAGNET: Why did you retire the LANDy moniker?
Goldberg: Well, every once in a while someone would make a snarky comment about the capitalization thing, and I’m very thin-skinned.

Speaking of LANDy, I always wondered about this: When you originally came up with that name, did you suddenly realize you had the cap-lock key on when you got to the “y” and then turned it off but were too lazy or stoned to retype the first four letters?
Oh. Uh …

Where does the name the Goldberg Sisters come from? I always assumed you were a guy, not a gal, mostly based on your ability to grow facial hair that I am completely incapable of. (And if you really are a woman, you deserve a lifetime-achievement Oscar for your acting; take that, Cate Blanchett and Hilary Swank.)
I’m sure you took particular note of my falsetto on the intro to the C section on “Shush.” I think you mean, “Take that, Julie Andrews,” as I am a woman playing a man playing woman who looks like a man who is a character actor who gets mistaken for Jonathan Silverman.

What is your reluctance to release music under your own name? If you pulled a Madonna and just used your first name, you would be pretty close to the front in record-store bins and even ahead of Ryan Adams. What do you think?
There is a singer/songwriter who has long published records under his name Adam Goldberg. Other people play with me. Band names are fun. I’m sick of my name; I’ve had it for many years. I wanted to call myself Will Oldham when he was calling himself Palace, Palace Brothers, Palace Music or Bonnie “Prince” Billy, but he wouldn’t let me.

One school of thought would be that since you are a well-known actor, people won’t take you seriously as a musician, as there have been some (well, tons of) awful records released by actors. The other school of thought is that your celebrity gives you an advantage over other musicians whose day job is, say, making burritos or driving a cab. What are your thoughts on the matter? And have you ever made a burrito or driven a cab?
I’m not well-known enough that it matters except for the occasional opening line to LANDy reviews: “Hey, this does not suck,” a grudging compliment that seemed to pain the delicate constitution of the journalist. But thank you for gushing. I have eaten many burritos; often I eat them exclusively for lunch. I have made burritos. I have driven several cars—’89 Caprice, Crown Victoria—that are used as cabs. Oh, was I supposed to be disingenuous here?

Aside from you and Ryan Gosling, can you think of any other actors whose bands don’t suck?
Surely. Coconut Records. She & Him. But more to the point: Just as most photographs, drawings, paintings and movies suck, so does most music. If you consider that far fewer actors make music than “musicians” make music, it would follow that most actors that make music would suck. I’d rather listen to Jason Schwartzman’s finely crafted pop songs than 99.9 percent of Grammy winners.

How did you hook up with Aaron Espinoza?
Gay bar. Well, it wasn’t gay per se. But we were gay while we hooked up. At Taix seeing a Mark Eitzel show. Andrew Lynch, one of the Goldberg Sisters session/live players, had worked with him. There were many connections. I dumped years of hard drives on him, something like 20 songs recorded in a variety of environments—some with L.A. band the Black Pine, some on my own, some with friends, namely Eric Siegel, who plays some mean guitar and all bass on the GS record, some with Steven Drozd of the Flaming Something Or Others. The sessions were a mess, largely because I messed with them so much over so many years. We recorded some new songs, namely “BFF!,” which was in a way a template for our process on this one, some overdubbing and ground-up mixing of everything. He’s a mensch and fucking great at what he does.

You are a self-described gearhead, utilizing both analog and digital equipment. How has your approach to making music changed since the days of the four-track being the only way to home record?
In a way, not at all. It was very organic. Even now (I have this Tumblr blog where I’m constantly, obsessively stricken by a form of productive-but-unhealthy hypomania, uploading “lo-fi” tracks), I will sometimes use a tape recorder. Record the tape into the iPhone, email it, then futz with it in GarageBand. When I first started, before I got a four-track, I used to tape record guitar and vocals, play it on my stereo, sing along to double-track back into the tape recorder. Of course, I’ll do more conventional Pro Tools and lately Logic recordings, but the approach has never really changed, though I think it was very helpful to have sort of organic “roots.” Same with editing. I began as a kid editing Super 8 film, then in 1989 bought a VCR tape to tape editor, then eventually used non-linear machines, of course, like the Avid. Pro Tools and Avids are dangerous but also beautiful creative tools.

Explain the process of how you made the album. You did it in one six-week stint at Aaron’s studio?
I had made a bunch of demos in the year prior, maybe four or five, pretty fleshed out. Then had some older songs, “Don’t Grow” and “The Room,” that I had recorded in a very fleshed-out way but needed to be “hi-fied.” Prior to the six-week stint, I enlisted Andrew, who is a talented engineer among his skills as a musician, to help me do scratches to all the songs. One song I wrote and recorded the demo/scratch two nights before going in: “The Difference Between.” I didn’t have Andrew set up the click so the BPM ended up being some absurd fraction of a fraction. Anyway, then I recorded that real lo-fi number, “You’re Beautiful When You Die.” It wasn’t intended for the record per se, just a nocturnal, quiet-so-as-not-to-wake-the-lady tape recording I actually re-recorded several times “slicker” but went with the original tape recording. A third, “Skin Of The Patriot,” I recorded with Roxanne on a couple of SM57s or something in the main room while Aaron was mixing the rest of the record. I’m surprised there is not more bleed from his blasting mix sessions. But yeah, we started with scratch tracks: first drums for three days, then started replacing all the temp tracks. Had little breaks because of scheduling issues, then Aaron mixed it in about a week. Then I walk away, make more notes, probably had four or five notes and re-recording sessions. Little things, things that would plague me, like, “I need snaps on ‘Third Person.'” Then I mastered it a few times. I have issues. But in essence, this was a very concentrated effort; if anything, lots of stuff got stripped away in subsequent sessions.

What instruments do you play? Did you take lessons on any growing up?
I took piano for three months until I sprained my thumb paying baseball and used it as an excuse to quit. I took drums a bit, but mainly played in the den to Bowie records, particularly Station To Station. I was never in a band. I was a jazz fanatic. I took tenor saxophone for three weeks and quit. I’m a quitter. I get anxious being taught things. Like the Avid; couldn’t retain anything, then one day (on the first thing I directed, Scotch And Milk), the editor got sick and suddenly I was editing. A little like this with guitar and then piano, which I play even more crudely than guitar. I couldn’t play, couldn’t write a song, wouldn’t learn. Had a dream I could. Got dumped. Got (more) depressed. Bought a guitar and wah and Boss RV-3, learned the basic open chords and started writing songs. It was a little like magic. I mean, most of them suck, were crude, two chords, etc. But some kind of osmosis from having been such a music lover must have leaked in. I became as obsessed with the snowy sound of the wah hissing in the amp, the white noise, as I did the act of songwriting. Not much has really changed, just some negligible improvement.

How big a band do you have when you play live? Do you plan on doing any touring?
With LANDy, we got up to seven. We began to approach the swirly layered cacophony that I was striving to reproduce. I think you can see us just before I went off to make the GS record at our largest on The Ship (Espinoza’s studio) sessions. This time, I decided to make it more manageable, travel-able. My European label is forcing to me to fly, which I hate, to play, which also makes me very anxious. I know, I know, bourgeois blues, what an asshole. Yeah, I’m an asshole, fine, but flying isn’t natural and either is performing for strangers. That’s neurotic. So we’re doing it, as I see it, interpretations of the studio album: Andrew and I sampled and sequenced my old drum machines and Optigan samples. The dogma was no fake “real” drums or bass lines, just Optigan loops and Rhythm Ace-type drum machines. He plays piano, synth, trumpet; I play guitar, lots of effects, going through a Boomerang III looper at times so I can solo over my rhythm stuff, and I play piano when Andrew goes to synth. Roxanne plays violin.

Aside from the acting and the music, I know you have directed, produced and written movies and that you are an avid photographer. Is there anything you can’t do?
Sleep.

One quick acting question: Who is a more demanding director, Steven Spielberg or Wayne Coyne?
Wayne.

When they make a biopic on your musical career (a la Ray and Walk The Line), who would you want to play you? I was thinking the movie could be called Adam or Yoo-Hoo, Mrs. Goldberg, but both seem to already be taken.
Funny you should ask, as I am writing this as eyes bleed with exhaustion after 14 hours on the set with Mr. James Mangold, director of Walk The Line. He has already recast me with Jason Schwartzman, who is playing Jonathan Silverman as interpreted by Julie Andrews.

What do you have planned for the rest of 2011?
Finding the right balance of psychotropic medication and meditation—after I finish this script that’s been eating me alive for the last year.

One reply on “Q&A With The Goldberg Sisters’ Adam Goldberg”