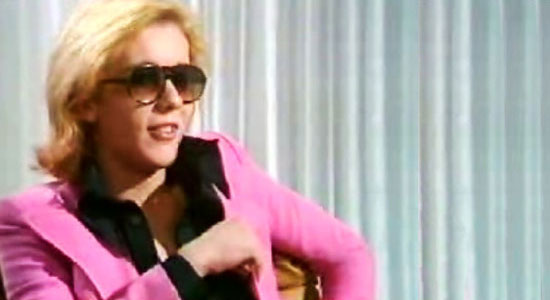 Hoffman: When Ann Magnuson and I were re-booting the Jobriath medley we first performed in 1996 for her recent Bowie Birthday Tribute, I put a question out on Facebook asking for other Bowie wannabes that perhaps deserved a moment in our Glamtastic show. Roderick “Mott Redux” Falconer was immediately suggested, along with the rather more Roxy glam posturings of New Zealand’s Space Waltz (“Beautiful Boy” is indeed a seminal glam track, and I used the word “seminal” advisedly), but the most earnest protestations were for the inclusion of one Brett Smiley, about whose canon, even though I happened to be a Facebook friend of his(!), I was criminally underinformed.

I was deluged with mp3s and YouTube links and was an immediate convert. I couldn’t believe my luck when an original copy of his sole 45 was available for a nominal fee on eBay (with the picture sleeve, complete with spell-challenged lyrics), as was his out-of-print 2003 CD compilation Breathlessy Brett and the 2005 Brett-sploitation bio The Prettiest Star: Whatever Happened To Brett Smiley?. It was a Brett bonanza!

I have been a student of all things Bowie ever since I got an original DJ copy of Bowie’s Deram album for 10 cents (!) in a cardboard box at the front of my local Santa Barbara record store circa 1970. There were about 100 of them; how I wish I’d bought them all! You can hear my slavish attempts at Bowie-tinged glam-deur in the chorus of “Imaginary Friend” from my new CD Fop, which shows off my guitar player Dave Bongiovanni riffing at his most deliciously Ronson-esque. Also, my duet with Prince Poppycock, “Soothe Me,” is a naked attempt to manifest the disco glam flavor of La Bowie’s “1984.”

Since Bowie’s credibility was one of the few that eked through the anti-stadium hate-fest that was so joyfully “punk” in my youth (at least until “Let’s Dance”), my Bowie throughline has been uninterrupted since high school, as has been my adoration for Jobriath. I heard snatches of Bowie-inspired glory in Lewis Furey’s “My Poetic Young Man” and especially the magnificent “Clarabelle’s Lament” and had studiously tried to navigate the vagaries of Steve Harley’s relatively dour Cockney Rebel, bought into Deaf School’s Roxy/Bonzo hybrid and, of course, slavered over Sparks’ every contemporaneous release. But how is it that I missed Brett’s special musical gift to this genre?

His album is the perfect amalgam of Bowie’s most unapologetically lispy space-y moment and trappings of the bubble-glam of the Sweet, presaging the breathless schoolboy vocals of Milk ‘N’ Cookies’ Justin Strauss (a.k.a. Justin Tyme) by a good two or three years, with the barely post-pubescent gender-indeterminate lasciviousness of Sable Starr-era Star magazine. It was if Rodney Bingenheimer had prayed at the altar of David Bowie’s infamous “dress” cover, which Rodney had ostentatiously framed on the wall of his famous nightclub Rodney’s English Discotheque, and Brett leapt forth, fully formed, to freeze the moment of Bowie at his most femme and most rocking in uniquely American form.

Brett’s story is by now fairly well-known (except to me!), but a quick recap finds him in a similar cultural quagmire as Jobriath in regards to his contemporary reception. Andrew Loog Oldham, probably feeling the pinch as his loopy ’60s credentials gave way to a rather less forgiving ’70s, seemed a tad desperate to find his own “Bowie” and thus wheedle his way back into the fickle embrace of hipsterdom. Brett was his tip for the top, and with fanfare equally as lavish as the hype that destroyed Jobriath, plus an immense budget that apparently was given more attention and scrutiny than Brett’s obviously transcendent gifts, the machine was set forth to secure Brett’s position as the “unisexual” (a term that is oddly still seen on hair salons in the most Latin of barrios all over Los Angeles) Most Beautiful Boy In The World.

The almost-perfect 45 of “Va Va Va Va Voom” (featuring longtime fave Steve Marriot on guitar! “Hey you with your red boots on/You’re mad/I assume!”) b/w “Space Boy” (an angelically twee anthem with soaring strings and these more-Bowie-than-thou-lines: “I’m holding on to your ionized trails/My zenith is thrusting at your Azimov tales”—now that’s a space orgy!) was released to minor radio play and quick obscurity. Yet a fabulously decadent, lavishly produced and luxuriously eccentric LP was already finished and ready to be released. With amazing lyrics like these from the gorgeously orchestrated “Queen Of Hearts”: “Celebrated, penny weighted, really vain/Sophisticated, elevate, a different plane/Extravagated, fabricate, I’ll entertain/I’m just the Queen of Hearts/I’ll leap off Sunset Towers/What a way to go/I can’t say yes/But I don’t want to say no.” Brett almost out-Bowies Bowie’s “twisted name on Garbo’s brow” and adds Philip Marlowe Los Angeles specificity to the gender-defying lament about cultural alienation.

Cue: Russell Harty, a popular English talk show host who brazenly brown-nosed any passing talent-challenged pretender (David Essex, anyone?) who’d been bought into the top 50, chose this moment to demarcate the line between himself as self-appointed “cultural” arbiter and this fresh young voice and tried to verbally assassinate Brett on the first question after a stellar performance of the glorious “Space Ace”: “Are you glad that’s over?” Russell’s career would live on to feed unthreatening pabulum to blue-haired, bridge-club attendees for years and to droolingly, sycophantically suck up to the very similar but more chart-friendly likes of Bowie. But even though Brett defended himself and deflected Russell’s clueless barbs with quick wit, deft ripostes and immense charm that so reminded me of my friend and raconteur non pareil Lance Loud, and by all accounts Brett won the battle, but he sadly lost the war. The mighty had spoken, and his album was never released. The great “T.V. Eye” had blinked and turned askance, and Brett was officially “over.”

With Jobriath, despite the unearned calumny and marginalization his very real accomplishments had been received with, at least we had the music; the original LPs were not hard to find, and Morrissey famously championed a Jobriath compilation on his private imprint. With Brett, the voice was silenced. The music was stolen from him and from us. It’s just a wonder that this glamsterwork has been restored to us, and even if the CD is currently out of print, you can still get the album on iTunes or check eBay or Gemm for your very own copy!

3 replies on “From The Desk Of Kristian Hoffman: Smiley-Come-Lately (My Tardy Love For Brett)”

great story. great video. one thing though, Milk n Cookies was formed in 1973 and when they asked me to sing that’s what came out. i bought Brett’s single in 1974 .. We were already recording the MilknCookies album for Island Records by then.

Such an awesome piece….and I’d never heard of Brett Smiley. This is EPIC!!!!!!!