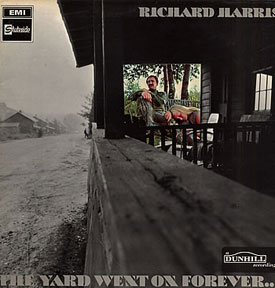 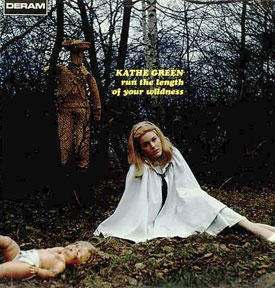 Hoffman: If the Fifth Dimension’s “Up Up And Away” gave author/composer Jimmy Webb license to drive and Glen Campbell’s take on Webb’s sweetly mordant “By The Time I Get To Phoenix” gave him license to speed, then his classic of lumpen excess, Richard Harris’ “McCarthur Park,” gave Webb license to fly! And Jimmy was going to grab onto the joystick of that magical mystery airbus with both hands and speed until he left “Rosecrans Boulevard” a million miles below and parachuted into an Orch Psych “Yard That Went On Forever.”

I’m only sharing that because this is a treatise in defense of that Webb-specific, over-produced bombast that rarely sidles into epiphany and more often flushes into schlager pap. But for some reason, between the rather more tasteful and disciplined restraints of Sgt Pepper and the muzak-adjacent, turgid Montovani stylings of the Moody Blues’ “Days Of Future Passed” (which upon careful re-examination reveals Justin Hayward’s impeccable gift for melody somewhat besmirched by the “conceptual” connecting arrangements), “McCarthur Park” lept into that awkward breach as an attempt to take the dry, academic, Left Banke quartets into the symphony pit for a tussle with the tympani and Sgt Pepper conceits into the provenance of Nelson Riddle. In other words, the ’50s soundtrack epic (think The Egyptian) made deliciously, deliriously trippy!

Hence, with the immense approbation given La Webb following his international “Good Vibrations”-like success with “MP,” he was able to do his most luridly, excessively realized statement ever: the Richard Harris concept album The Yard Went On Forever, which, not inconsequentially, was a huge flop. So many ingredients! There’s some Elmer Bernstein, some gospel-lite, and I really don’t know what the “women of Pompeii” are doing “standing with the Kansas City housewives on doomsday,” but it’s fascinating and filled with studied, mildly atonal arpeggiations of French horn and strings. “There were houses, there were hoses” may not have been La Webb’s most felicitous homily, but his landscape peopled with typical condescension toward “The Everyday Housewife” (house waif?), in the arch tropes of that supposedly liberated moment, certainly post-supposed a muzak Betty Friedan as a poetess of odd and not easily measurable talents—the housebound wife recoiling against her societal limitations in a Reader’s Digest approximation of highbrow “art poetry,” a discipline of which Ms. Yard WOF has woefully little experience.

Then, when the “women of Bombay stand with Nagasaki housewives,” it just reeks of fabulously uninformed yet still legitimate historical angst and a cool kind of uninformed yen for exotica. How delightfully desperately Webb hungered for cultural observations (like the crazed, psychedelic finger wagging at the conventions of Slightly Swingin’ Suburbia) that linked the otherwise curiously middlebrow, “sensible” Webb with almost radical corporate fatigue (“There’s no place like numb!”) and mid-career ennui, like Jack Lemmon, bemused—but not seduced!—by the “new values” of the teenage hippie chick he just happens to be fucking in Save The Tiger, but only if Jack had shared a little more acid.

But the unifying theme is orchestral and choral immensity, like a sensory hot tub of aural overkill. Because Webb was making a “statement,” he thought he had to “go big,” and ultimately the “going big” is the most fantastic aspect of the statement. It’s not a wall of sound; it’s a hurricane of sound. It is where surface becomes fabulous substance, and the vessel supercedes the contents.

Surprisingly, there is a sister accomplishment: Kathe Green’s insanely overproduced orgy of untoward lyrical ejaculations (with the bizarre Wicker Man cover, found, aptly on the transitionally “prog” label, Deram), called Run The Length of Your Wildness, a title bereft of ironically phallic wink. She waxes Harris-like with horns and strings, and it turns out it was actually advice that Richard Harris gave her. With admiring quotes from Peter Sellers, Rex Harrison and David Frost(!), Kathe sings in what is, despite being oddly uncompelling, a Mari Wilson voice that is surprisingly fetching. “He’s a tattered rag/You’re not content with rearranging empty spaces in your soul.”

In any case, I fancied in my fancy that songs like these catalyzed a Rufus Wainwright/Kristian Hoffman dialog that is surely more in my fancy than his. But I had early on dallied trying to wed my sub-Costello adventurism with a Harris/Webb bombast, circa 1996 with “That Beautiful Word” (from my CD Earthquake Weather, which also held my most brazen Left Banke wannabe tune, “Rehearsal”). I may have only imagined this cultural conversation with La Wainwright, but it felt like there was some vague reality to it. When I was rehearsing “Scarecrow” with Rufus at his Hollywood home (with Kate McGarrigle editorializing while preparing a smart lunch from the other room), he played me a rough mix of his delightful “Evil Angel” from Poses, and I knew he was “going as big” as I planned to on our duet, “Scarecrow.” I felt we were giving each other the once obscure but now reclaimed Jimmy Webb license to go big and bigger and biggest! And I do believe when he came to Earle Mankey’s studio to record “Scarecrow” as a duet with me, I returned that license. So when I heard the unapologetic sonic immensity of what I think of as a Rufus Masterwork, “Go Or Go Ahead,” my inner Webb was stirred again from slumber, and “Something New Is Born” from my new CD Fop was freed from the garden of the muses in the same way that “Scarecrow” may have prompted “Go Or Go Ahead.” Please, visit the origins of this imaginary dialog. Even if I’m wrong about Rufus, I’m certain that I’m right about Richard!