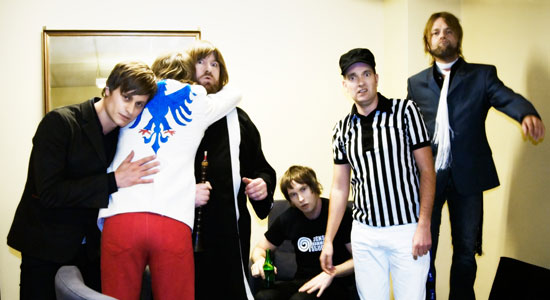 We assume most MAGNET readers are already under the magical, musical spell of the Soundtrack Of Our Lives, but if not, 2011 is the perfect time to change that. The Gothenburg, Sweden, band just released Golden Greats, No. 1 (Little W/The Orchard), a 19-track compilation of songs from throughout the group’s career. TSOOL formed in 1995 after the demise of Union Carbide Productions, a great, punk-leaning band featuring vocalist Ebbot Lundberg and guitarist Ian Persson. Since, TSOOL has released five studio albums and a handful of EPs and non-album singles, earning a Grammy nomination for 2002’s excellent Behind The Music. Lundberg will be guest editing magnetmagazine.com all week. We recently caught up with him via email while TSOOL was at a tour stop in Brussels.

MAGNET: Why was now the right time to release a career-spanning best-of?
Lundberg: It was not a “best-of” really. More like an introduction for dummies. It was our old record company who came up with the idea because of the song “Karmageddon.” A song we felt did not fit into any album except a compilation, so we agreed to do it with some good old remastering and other unreleased tracks.

Were you guys in agreement as a band as to which songs to include on it?
Yes. Though it was hard. All the best songs are not there. Far from it. But as I said. it is more like an introduction to people who never heard us before and an appetizer for the next album that we are working on right now.

Speaking of which, when can we expect Origin Vol. 2, the follow-up to 2004’s Origin Vol. 1?
Next year as predicted.

On your Facebook page, it says, “The purpose for this band’s existence is: The spiritual guidance through the great transformation that we are now experiencing as we move towards the zenith in the meridian of our galaxy, the Milky Way.” Can you elaborate?
Shortly. For everything, there is a season, and we shall all walk on water as Narcissus is dying in his own reflection. Reflect yourself on a CD or a vinyl. Soon, the last song is over, and it’s time to switch to the other side. And we will hold the pick-up for you to be let down on a new awesome track and level of existence.

You did a Facebook contest to determine who the great TSOOL fan was. Who was it?
Don’t know. Bob Ezrin maybe. Or a guy named Per Ekman. Probably the son of Gösta Ekman, who is a very famous Swedish actor.

You guys hail from Gothenburg. What can you tell us about your hometown that we probably don’t know?
That Batman was originally from here, and the Goths who put an end to the Roman Empire also originated from here. Now it’s finally our turn, I guess.

Aside from TSSOL, the list of musicians from Gothenburg is quite impressive: José González, El Perro Del Mar, the Knife, Jens Lekman, jj, etc. What there inspires such musical creativity? What is the music scene like there in 2011?
There a new bands like the Oholics, the Preacher & The Bear, Graveyard, Martin McFaul and a great band called Silverbullit. The atmosphere is very mysterious and inspiring. Gothenburg is a good spot on this planet if you are looking for a template.

Does TSOOL ever get mistaken for California hardcore band TSOL?
Never happened as far as I know. But maybe I could be wrong. But I don’t mind really. I used to be a True Sounds Of Liberty fan in the early ’80s, to be honest. I did not realize until very late that our band name almost had the same initials. And we do not mind at all. And I hope they don’t bother, either.

What do you guys have planned for the rest of 2011?
To continue the recording of the new album and do some occasional visits to the U.S. and elsewhere.

One reply on “Q&A With The Soundtrack Of Our Lives”