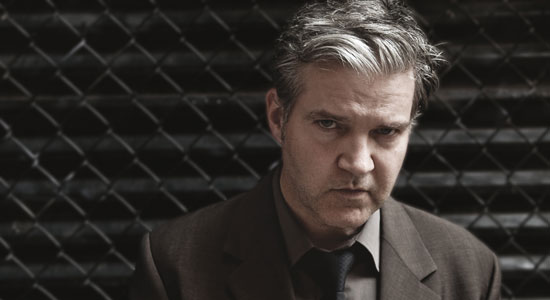 Lloyd Cole first made a name for himself back in 1984 with the Commotions, the British band he founded in Scotland before relocating to New York City four years later. Since, he has released records both as a solo artist and with the Negatives, a band featuring Jill Sobule and Dave Derby. Now based in western Massachusetts, Cole recently formed the Small Ensemble with local musicians Mark Schwaber and Matt Cullen. The trio is joined by the likes of Derby, Fred Maher (Lou Reed, Matthew Sweet), Rainy Orteca (Brilliantine), Blair Cowan (Commotions), Joan Wasser (Joan As Police Woman) and Kendall Meade (Mascott) for new album Broken Record (Tapete), Cole’s first “rock” LP in almost a decade. Cole will also be guest editing magnetmagazine.com all week. We recently caught up with him via email.

MAGNET: What was the impetus for forming the Small Ensemble after so long on your own?
Cole: A change is all. I think I had taken the troubadour thing about as far as I could with my limited guitar skills, and I’d been pretty much through the whole songbook.

You recorded the new record with those two new Small Ensemble bandmates, but you also worked with a handful of people who are longtime collaborators, including Blair, who you have worked with on and off since 1983. How was it mixing the old with the new? How did it feel to be back in the studio with a rock band?
Mixing the old with new was simple and natural. The team was very easy to assemble—current collaborators plus may favourites from previous projects. I’d never had Rainy on one of my records before, but I played keyboards in Brilliantine and loved her playing since. The only person I hadn’t worked with was Joan, and that was me just being a fan and hoping that she would naturally bring an extra element to the project. Working with a rock band was strange. It felt just the same as it ever did. My voice hasn’t changed that much in the last 15 years or so, and so I’d be singing and playing the live guitar tracks feeling just like a 20- or 30-something, and then I’d see my reflection in the gobo window: “That guy shouldn’t be doing this.”

The new record was financed by the German-based Tapete label and 1,000 of your fans, who each paid $45 for a pre-release deluxe edition. How did this all work? Do you plan to keep doing things this way?
Too complicated to go into. Suffice to say that the concept was fine, but the actual work required from my wife and me was far, far more than I has envisaged. It was awfully stressful. We may do something similar again, but we will not be the shipping hub!

You really seem to have embraced the technology the web can bring to the artist/fan relationship. You kept a detailed, daily journal while recording the new record. You solicit feedback and criticism from fans about your music. What made you start to do this? How is it working for you?
Well, I’m not sure I like it. What mystery is there left to me? But my website is critical to my career. And it needs to be dynamic to keep the fans coming to it. And I’m not interested in having a generic presence. I’m picky, design wise, so I’m a designer, too, and here we are.

I refuse to listen to music on my computer; I’d rather listen to a cassette on a shitty stereo. I find it kinda ironic that while the advancements in technology have been vast, people care less and less about the audio quality of what they listen to. As an artist, how do you feel about that?
I don’t care either way. I listen on my computer all of the time. Not always, though. I still mix and master to make the best possible sounding record. And we master to sound as good as possible on all systems. We do not prioritise the car stereo or the $20,000 system. At home, I listen on a Tivoli audio mini system. I like it. I also have studio Genelecs to work on. Also a ProAcs with a nice old Quad amp—probably the best system, but I hardly ever use it. Interesting, on this project we produced vinyl again for the first time since 1995, and I’m just not excited by it. We’ve figured out—we did this years ago—how to make CDs sound fine.

What prompted your move to America in 1988? At the time, did you think you’d be here this long?
I don’t think more than a year or two ahead. Never have been able to. I ended up in NYC by accident and liked it. Met my wife, she liked it, too, so we stayed 11 years.

Did your relocation from NYC to Easthampton, Mass., in 1999 and raising a family change your approach to music at all in terms of how you work or how you tour? Is it harder to be autobiographical in song with a family, especially with kids who are old enough to understand what dad is singing about?
I think the key thing is that I now have a good reason to make music for a living. When it was just for me, it was different. I can’t afford to turn down lucrative festival gigs. I hate 99 percent of festivals, but Will starts at NYU this year … And sure, it can be a little tough to write those songs, but I guess I’ve done it.

You achieved a good amount of commercial success early in your career. Did that make you feel the need to reach certain goals on subsequent records? Do you even think about stuff like that now?
I recall we were disappointed to sell less than a million copies of (1987’s) Mainstream! I don’t really think about that stuff now. I think about a body of work. Anything I release from here on in needs to be a significant addition to the body. If I can’t do that then I become an oldies artist. Which would be fine. We have years of archival work that needs to be done and a huge portion of the work is out of print. I want to be 100 percent in print before I’m finished. And iTunes does not count in my book.

You spent the first half of your career on a major label and the second half doing the indie thing. Now that you have a long track record with each, how would you compare and contrast the two? What advice do you have for young musicians? How much control do you have over your back catalog?
Oh boy, do you have a week or two to discuss this? I’ve worked with excellent, motivated labels: major and independent. I’ve worked with terrible, disorganised, could-care-less labels: major and independent. I think there are maybe just two keys: The label must really love the music and believe in the artist. When this stops, you must move one. So I guess your contract must not tie you to a label for more than an album at a time. And you need to own your master tapes (files). Universal own all of my stuff (world except North America) from 1984 to 1999, but my contracts gave me veto rights. I just turned Universal down when they presented an introduction-to-type CD set which was sloppily and cheaply put together.

Are there any other artists you view as peers and that you keep tabs on as far as how their careers are going, etc.?
Nick Cave. Morrissey, I guess. But I cannot be jealous of his success. We go about things in completely different ways. I’m glad that Prefab Sprout have such a devoted following, still. I like much of Nick’s work and Paddy (McAloon)’s work, but I would not swap my body of work for that of any of my peers. Prince is the only one I am completely in awe of.

What would the 23-year-old Lloyd Cole think about the music and career of the 50-year-old Lloyd Cole? Did you imagine you’d still be doing this after almost three decades?
I think I would probably have just have jumped to the conclusion that it was a sad state of affairs and not bother to listen to the records. I was pretty stupid in 1984 with regard to this sort of thing.

You seem to be quite popular in Sweden. Why is that?
Why Portugal? Both seem rather melancholy people … I do not question when it goes well. Why did I never do better in North America? I don’t know if I want to answer that either. Maybe they had the right idea all along and I’m not meant for the Letterman show.

I hear you are a hell of a golfer. In Golf Digest‘s first ranking of the top musicians who play golf, you were 11th, but in its second ranking, you fell to 14th. What can we do to get you to crack the top 10 next time? Maybe you need more of a John Daly approach to your game.
I will be back in the top 10, don’t worry. Alice Cooper is coming to a theatre near us in the fall. I will be issuing a challenge.

3 replies on “Q&A With Lloyd Cole”

I am so happy to see this interviews and his writing because I am a long-time fan of Lloyd since his Commotions era. Stupid fan as I am, I feel I have grown up with his music, and reading these articles and interviews confirm my belief. I am a married middle-aged woman with children, and that does not diminishes the importance of music in my life. Interesting to know, I love Prefab Sprout, too!
One confession to make – I have never heard of this magazine. Is this mainly circulated in North America? I live in Adelaide, South Australia.

Great interview/Q&A with the great man. I was one of the advances purchasers of Broken Record but hadn’t realised that he and his missus did the logistics!!

I was lucky enough to see The Small Ensemble when they were in Sydney and meet the band after the show. The had a great sound and had he venue rocking.

Looking forward to your next trip down under Lloyd.

The Copenhagen gig was also excelent – next time we have to do more promo for the concert, so Lloyd have a reason for comming (back).