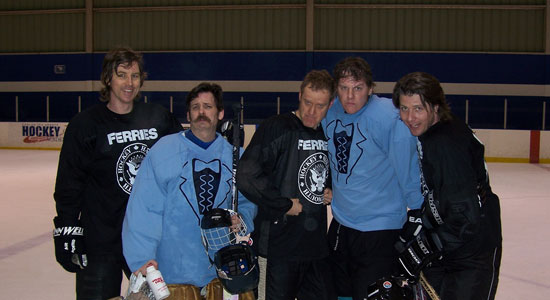 Murphy: I’ve been playing in this amazing hockey league called the Hockey Association Of The Arts for the past 10 years or so. I played hockey as a kid, but like everyone I liked then and now, I quit around grade seven or eight because it was getting violent and stupid. A friend of mine, Tom Goodwin, got me playing hockey again as an adult by promising it wouldn’t be like the hockey I had quit as a kid. He was right. The league comprises mostly people from the arts community. It is coed, safe and fun. Over the years, the league has thrived and expanded. Every year on Easter weekend, teams come from all over Canada to Toronto for the Hockey Summit Of The Arts. Though I play on a great Toronto team called the Blackhearts during the regular season, I play on a team called the Halifax-Dartmouth Ferries at the summit. There have been many great teams at the summit over the years: the Parkdale Hockey Lads, the 3 Gut Feelings, Vancouver Flying Vees, the Blackhearts and Peterborough Pneumonia among them, but our greatest rival over the years has been the Ottawa team.

Teams not playing during games provide a live soundtrack to the contests (between whistles, of course). This is known as rink rock. In the evenings, teams put on a 20-minute cabaret act for the other teams at a club. This is known as the hootenanny. In the early days, these acts were essentially straightforward versions of Ramones and AC/DC songs, but they have become quite elaborate—in part because the hootenanny was made into a competition, but mostly because the Ottawa team inspired everyone to go further. We play hockey against Ottawa, but it’s more of an off-ice rivalry that we have, and we never win. Their team spirit has raised the bar so high that they will never be topped, but it seems a lot of teams are trying. For starters, the Ottawa hockey jersey is in the style of a tuxedo T-shirt, and the numbers on the back are Roman numerals. One year they wore gold, spray-painted hockey pucks on gold chains around their necks with 613 (the Ottawa area code) written on them. The next year they all came dressed in fez hats and fake red mustaches and beards. They didn’t just wear these outfits onstage—they wore them all weekend. The next year, a lot of teams followed suit, but no one was able to top the human pyramid that became Ottawa’s trademark at the end of their act. Ottawa had a Star Trek/outer-space theme the next year, and the next year the league made them judge the hootenanny because they were always winning the hootenanny award—so they all wore powdered wigs and judges robes and carried gavels.

The Ferries usually have at least a few players that are “too cool” to wear outfits all weekend, but we have done several elaborate hootenannies. One was a “workshop” for a musical using MIDI versions of April Wine songs. We did Kiss with every member past and present. We did the first Bee Gees reunion after Maurice’s death, and as a surprise to Barry and Robin, we brought out the recently deceased corpse of Maurice and their long-dead brother Andy for good measure. By the third song, the dead brothers were dancing, Weekend At Bernie’s 2-style. We thought that was pretty cool, but Ottawa came as the Smurfs and destroyed us again. My favorite year was 2008, when without consulting each other, the Ferries did Sha Na Na, and Ottawa dressed as greasers and performed altered songs from the movie Grease and called it Crease. Once we figured out that we were essentially rival ’50s nostalgia acts, we decided to incorporate them into our act and performed a few ’50s songs. Some of the Ottawa guys rushed the stage, stabbed me and had a knife fight/rumble while Michael Jackson’s “Beat It” played through the P.A. Fake blood was tastefully used. It was videotaped by our team but immediately watched and taped over by drunken Ferries. We all sang’ 50s songs in the parking lot after the awards ceremony, but we were shut down by the cops because those cops still can’t handle those rebellious ’50s ballads.

The Ottawa team still comes to the tourney, but some of their more colorful guys have gone AWOL over the past few years. This year marks the first year that not one guy flew up from Halifax to skate with us. We’re all getting older, and lots of us have kids, but luckily the league continues to attract younger teams that challenge the Ferries on and off the ice. The Cosmic Daves of Sudbury really impressed me last year with their Black Sabbath Christmas show. They’re just the type of new blood the league needs.

There were a lot of great hootenannies this year. The Ferries were a Sex Pistols tribute band being presented by a commercial-radio DJ in a battle-of-the-bands format. The DJ wasn’t thrilled with their act, so he attempted to jazz things up by getting them to rap and add saxophone. Controlled chaos ensued. The Cosmic Daves predictably had the best act as the cast of Gilligan’s Island singing Beach Boys songs, complete with so many props that even Carrot Top might have suggested they tone it down. The Ferries hosted the Sunday awards show as the MRCH Morning Zoo Crew, which had us winging it with two laptops loaded with dozens of “cheap laughs” morning-radio sound effects.

Thanks for getting me playing hockey again, Tom Goodwin. I still hate jocks.

Videos and more photos after the jump. 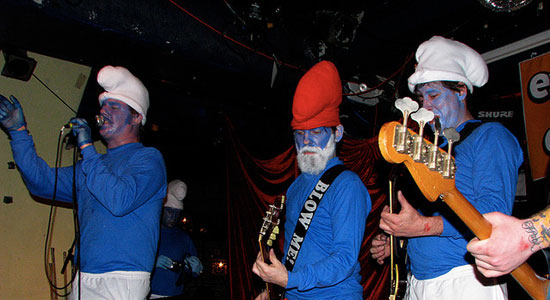 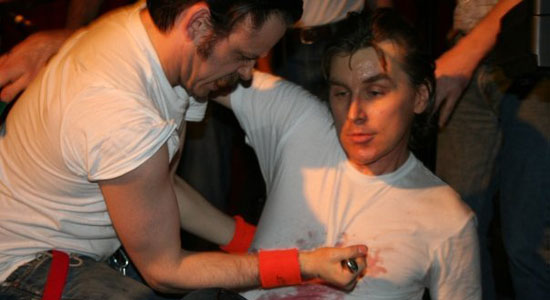 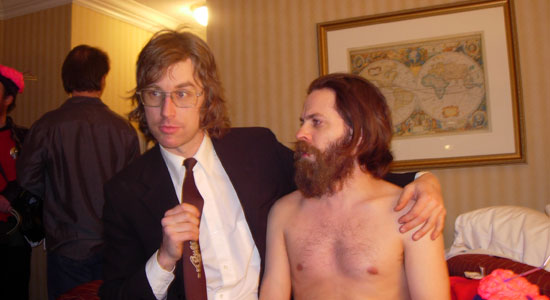 2 replies on “Sloan’s Chris Murphy Believes In: The Hockey Association Of The Arts”

Here is another slideshow from the 2010, posted on the same YouTube channel as the Union Jack Squat performance from the 2011 Hootenanny.
Wraps up with a shot of Chris in full Kiss gear, taken in the stairwell at the Hootenanny.
Here is the direct link –
http://www.youtube.com/watch?v=u-sIYeLmeLU&feature=channel_video_title

I love it! I think there should be an arts and soccer summit! What a great idea – I wasn’t a jock in high school, either (in fact I was an art nerd and a band geek), but I played soccer as a kid. Way to have fun!