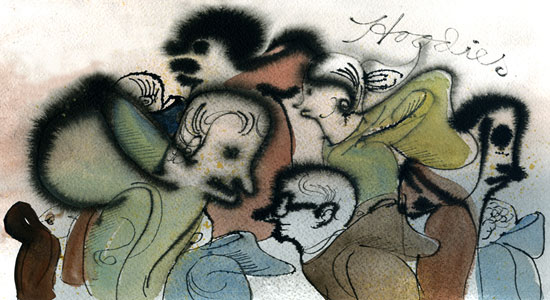 Hall: You sat down to brainstorm cover ideas for The New Yorker. Your drawing table is next to the balcony where you sit sometimes amongst planters and morning glories. Then it’s back to the old drawing board. But not before you turn on the little pump that pumps water in a loop, like a fountain, into a rectangular planter and creates a pleasing trickling sound. Paul Simon’s new album played in the background, and Vampire Weekend didn’t even cross your mind. Memorial Day weekend was on your mind, though, as you still didn’t have a date for the prom. You were wearing the hoodie that musician Dave Dondero gave you last month. You are not a hoodie type of person. In fact, you considered yourself the last person on earth whom you’d imagine wearing a hoodie. But look at you now! It just goes to show you (as Einstein and Proust have shown us) that it’s all relative. That what you one day despise, you may one day embrace. That one man’s trash is another man’s spare tire. And that when the going gets tough, the tough get going.