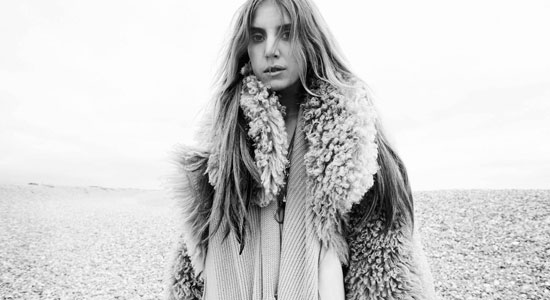 Nordic crooner Lykke Li’s show at the Regency Ballroom in San Francisco sold out more than six months ago. While she is certainly a rising star, at the moment she is more PJ Harvey than Lady Gaga (i.e., my grandma hasn’t asked me if I’ve heard of her yet). I wondered what kind of folks would assemble at the venue: the generic flannel-and-ironic-mustache-sporting San Francisco hipster crowd? Cologne-doused males from across the Bay who heard Kanye rap with Li on “Gifted,” with their girlfriends who wear stripper heels and purple hair extensions? The StubHub speculators who couldn’t scam enough people to get rid of all the tickets they bought in bulk half a year ago?

The show was a stop on her U.S. tour to promote her moody, cerebral sophomore album, Wounded Rhymes (LL). Her beautiful, ice-sculpture vocals mingle with indie electronic pop similar to fellow Scandanavian artists Röyksopp and Peter Bjorn And John. (In fact, Bjorn produced both of her albums.) While her first full-length, Youth Novels, betrayed a blithe, upbeat youth (she recorded it when she was 19), Li’s latest effort is more brooding. Her debut released endorphins and balanced out your serotonin in a quick, superficial high, like eating a Xanax. Wounded Rhymes digs into the deep recesses of your brain and probes through your latent emotions, like spending an afternoon on a plush suede couch in your therapist’s office.

Li has the suitable artistic chromosomal makeup to become a star (her mother was a photographer, her father a musician) and has displayed Gaga-esque world-dominating ambition during her brief career, with two hit albums, numerous EPs and her own record label by age 25. And she doesn’t need to wear hot pants to command the stage.

The demographics of the crowd actually in attendance was about 80 percent female, of the faux-hawked, leather-jacketed, and tattoo-sleeved variety. I’m also pretty sure every Swede within a 100-mile radius came out to support their home girl. There were a lot of flaxen haired, leggy women roaming around, and the lady I chatted with in the 30-minute line for the bathroom said her best friend she was with was Swedish.

Opening in a theatrical style, with spotlights blinking and drums rolling, Li floated to the stage on a billow of smoke that seemed to have been swept from arctic tundra. She had the powerful, fluid movements of a Pilates instructor, the kind that make you unconsciously imitate her. Floor to ceiling, fluttering black curtains whipped around the cloaked singer, in a resurrection of Madonna’s “Frozen” video from the ’90s. Li performed a fair balance of tracks off of each album, including the quivering “Little Bit” from Youth Novels and the bouncy “I Know Places” from Wounded Rhymes.

If there was a disproportionate amount of estrogen in the room, I couldn’t feel it (not counting the Disneyland-long wait for the womens’ bathroom). Most songs leaned heavily on rumbling guitars and rollicking caveman-arm drum beats. At the finale of “Get Some,” the band dropped an atomic bomb of thunderous percussion and an impenetrable firewall of synth that literally knocked me over (seriously, I tripped) and deep-fried my internal organs. I’ve been to plenty of concerts, and no riff or jam has ever been so explosive.

Lykke Li is a pop star with depth. While many young singers have to romp around half-clothed to make sure they fill the month’s quota of People pages, Li is more of a “wink from across the room and turn back to her friends” kind of girl. The beauty of her music is that it’s both digital and unprocessed—she bares her soul, and then sticks it in Fun Dip. Her fans hung on her every tinkling “ooh” and “ahh,” and besides the grizzled homeless dudes who ask for tickets outside of every show ever played, there were no scalpers in sight, StubHub or otherwise. So far, she seems to have found a recipe for success.