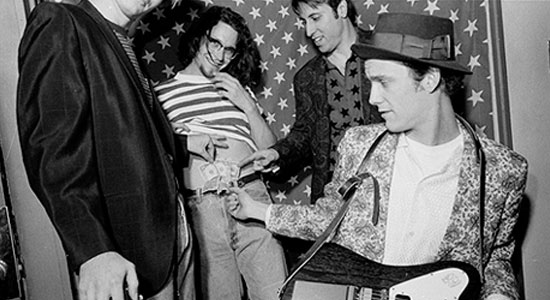 Ex-Mendoza Line frontman Timothy Bracy and his wife Elizabeth (who often lends her accordion skills to Bird Of Youth) live in D.C. and are working on an album with their new band, the Collection Agency.

Bracy: As everyone knows, mainstream success in the music industry is frequently capricious and always subject to factors unrelated to the quality of the product at hand. What is somewhat more mysterious is the way that deserved acknowledgment can be elusive even within the dread ghetto known as “cult status.” For great artists who labor unjustly in the face of commercial indifference, a confluence of post-career critical consensus can sometimes afford a consolation prize of hallowed acclaim or perhaps even financial windfall. Well-loved instances of this phenomenon include (of course) Big Star, Gram Parsons and the Velvet Underground. While it may not be enough to erase the bitterness of having been unfairly ignored the during the first go around (Alex Chilton never quite seemed to forgive and forget, and Gram didn’t live to see his legacy burnished), it still beats picking cotton and waiting to be forgotten.

Whatever the reason, the critical community and other “influential tastemakers” have yet to circle the wagons around the great, too late Liquor Giants. Led by brilliant singer/songwriter/guitarist Ward Dotson, the Liquor Giants, between 1992 and 1998, led a six-year Sherman’s march through everything great that rock ‘n’ roll music has to offer. They burned, plundered, begged, borrowed and stole. Great Exile-era Stones rockers were co-mingled with the kind of power-pop melodies vouchsafed to only a very few talents (the best of Dwight Twilley comes to mind). Other hallmarks included wry lyrics accompanied by an immediate sound, which was low fidelity without ever appearing self-consciously “lo-fi.”

As was the case with Big Star’s fetishized Briticisms in the early ’70s, the Liquor Giants managed to play the exact right music at precisely the wrong time. In an era when Temple Of The Dog was considered high art, Ward Dotson and the Giants’ songs possessed the commercial handicap of real passion, humor and hooks. Time has come to right this wrong. All of the Liquor Giants four proper albums are worth purchasing immediately, but I recommend starting from the beginning with the first record You’re Always Welcome. You might also find it retitled on the Australian reissue America’s Number One Hit Makers. If only it were so.